The long-eared owl may be found in many areas of Britain and Ireland, but it is not common and, being nocturnal, it is rarely seen. 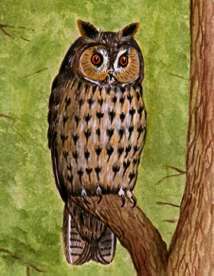 All owls have flattened faces, forward-facing, sensitive eyes and excellent hearing - adaptations which allow them to find their prey in very dim light. Owls can fly silently because of their soft feathers and this allows them to pounce on their victims without warning. The powerful claws seize the prey, perhaps a mouse, quickly killing it. The hooked bill may be used for carrying prey and ripping it apart.

The prey of the long-eared owl depends on the area where the owl lives. In some places, many birds are eaten, but small mammals are generally the most important food. Sometimes a pair of owls may hunt together, one of them flushing out the prey while the other pounces.

The long-eared owl does not like living near humans. It is much more shy than the tawny owl, which has adapted well to man-made environments and happily lives in gardens and parks, as long as there are trees to roost and nest in. The shyness of the long-eared owl may explain why it is not as common as the tawny owl.

Another factor which has an influence on the breeding success of the owl is the amount of prey in the owls' habitat. For example, if the population of small mammals is low one year, fewer pairs nest and fewer young are raised. Modern intensive farming methods, which have reduced the number of small mammals and small birds in the countryside are likely to be having an effect on the long-eared owl population. However, in 2020, there have been sightings of the Long-Eared Owl in the Peak District with the fledgling long-eared owls being spotted on a grouse moor.

If spotted, the owl's long 'ear' tufts make it easy to identify. The 'ears' are not really ears at all, but just tufts of feathers. The actual ears are simply holes, hidden under the feathers at the sides of the head.

Long-eared owls hide away, roosting amongst thickly-branched trees. In the autumn and winter, groups of up to 20 owls may roost together. Sometimes a roosting bird, or an anxious one, sits close to the trunk of a tree and pulls itself into an upright, slender shape; this helps it to blend in with its surroundings.

Long-eared owls begin to breed from late February onwards. These owls are usually silent, but during courtship the birds clap their wings and make strange-sounding wailing and yelping noises. A low, sighing "oo-oo-oo" may also be heard!

Three to eight white eggs are laid in an old nest belonging to a crow or a pigeon, but sometimes they are laid on the ground in a scrape under a tree or amongst heather on moorland. The female incubates the eggs for 25 - 30 days. The newly-hatched chicks are rounded in shape and covered in a thick, white down. The male bird brings voles, mice and birds to the nest and the female feeds these to the babies. The owlets' down is gradually replaced by adult feathers and they fledge (ready to fly) at 23 or 24 days old.

If the nest is threatened by a possible predator, one of the adults tries to frighten it off by drooping its wings and puffing up its back feathers to frame its head. This makes the bird appear much larger than it really is.