The tawny owl is nocturnal and therefore not often seen during daylight. Its familiar hooting 'hoo hoo - hoohoo' call is usually heard at night; a loud 'kee - wick' call may be heard mainly in the autumn. 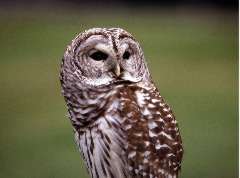 Distribution: most of the British Isles (absent from Ireland); rest of Europe except northern Scandinavia, parts of North Africa, western Russia, Afganistan and China.

Description: stocky, large round head with black eyes and broad rounded wings. Plumage is usually a rich tawny brown although greyer birds are found in northern areas. Upper parts are mottled in appearance. Buffish below, heavily streaked with brown.

The tawny owl is nocturnal and therefore not often seen during daylight. Its familiar hooting 'hoo hoo - hoohoo' call is usually heard at night; a loud 'kee - wick' call may be heard mainly in the autumn.

Daily Life: the tawny owl is a resident bird and stays in its breeding area throughout the year. Hunting takes place at night and the owl is perfectly adapted for this. It has extremely sensitive eyes and ears which enable it to locate its prey in very dim light. The tawny owl's hearing is so good that it can pinpoint prey even when it is too dark for its sharp eyes to see. The soft plumage and comb-like leading edge to the wing-tip enable it to fly silently. The owl waits quietly on a perch, then glides down and pounces on its unsuspecting victim, killing it with its talons or with a quick bite after capture.

The tawny owl's diet often depends on the habitat it is living in. In woodland, mice and voles are mainly eaten with some birds, shrews, worms and beetles. In urban areas, small birds may form the main part of the diet such as sparrows and starlings. They have been known to take goldfish from garden ponds.

A tawny owl spends the day roosting on the branch of a tree and is often mobbed noisily by small birds such as chaffinches, house sparrows, blue tits and blackbirds, though they seldom manage to disturb the dozing owl!

The tawny owl is quite a common bird over most of its range and it is reckoned that there are 50 - 100,000 pairs in Britain. Back in the 1950s and 1960s, as with many animals and birds, it suffered as a result of toxic pesticides such as DDT; however, since the banning of these dangerous chemicals, numbers have recovered to a certain extent. Modern farming methods have caused a decline in the number of hollow trees available for nesting sites; the owls may be helped by the provision of nest boxes in woodland, parks and large gardens.

Young owls will often leave their box, or natural nest hollow, before they can fly properly and hide on nearby branches. If you ever find a baby owl on the ground, the best thing to do is move it to a safe spot on a nearby branch where it will be safe from predators such as cats, dogs and foxes. Its parents will be able to find it easily and will bring food at nightfall.

Tawny owls pair up and choose nest sites in the autumn. A hole in a mature deciduous tree, such as an oak, is a favourite place, but old nests, or crevices in rocks and buildings may also be used.

The male courts the female for several weeks before mating by bringing her food. Sometimes they display by swaying and may also preen each other.

A clutch of 2 - 5 white eggs is laid from about March onwards at intervals of up to a week apart. The female incubates the eggs, starting with the first egg, which means that the young hatch at different times and so vary greatly in size. She sits on the chicks while her mate brings food. The incubation period is 28 - 30 days. The young are fed by both parents until they are two or three months old although they can fly at about 5 weeks of age. Eventually they are evicted from the nest and find territories of their own. Only one brood a year is produced.