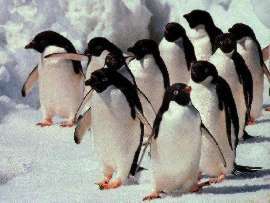 Distribution: Ranges from the Antarctic and sub-Antarctic as far north as the Equator at the Galapagos Islands.

The name penguin originally belonged to the now extinct bird we call the great auk. If you happen to be Welsh or Welsh-speaking, the name has a definite meaning, as pen-guin sounds like the Welsh pen-gwyn, or white head.

The fact that most species of penguin have a black head just goes to prove how misleading the world of Natural History can become at times. However, the great auk did look a little like a penguin although it was in no way related, so perhaps the transfer of the name is understandable after all.

The penguin has two main predators, the killer whale and the leopard seal. Humans hunted penguins up until the early 20th century. We used to capture and kill millions of penguins to make oil from their fat.

Today many penguin populations are increasing. This is probably a result of the declining whale population which reduces the competition for food. However, sea pollution is seriously threatening the bird's long term survival.

Many people believe that all penguins live deep in the frozen world of the Antarctic, but this is far from being the case, as only three species (Emperor, Adelie and Chinstrap) actually live in that barren region of snow and ice. The others are distributed throughout the oceans of the southern hemisphere ranging from the Antarctic and sub-Antarctic as far north as the Equator at the Galapagos Islands (Galapagos penguin).

There are seventeen species of penguin:

The oldest fossil remains of a penguin come from New Zealand and date back about 50 million years. Apart from the fact that it was much taller (it measured about 1.6m) than modern penguins and had longer wings, it was similar in general appearance.

There were, in fact, ancestors of this fossilized penguin on earth millions of years earlier. The ancestors of today's species of penguins were able to fly - just as the great auk and the dodo originally had the power of flight.

Penguins Disappearing From the Antarctic

Penguins are the most common birds in the Antarctic. Living in colonies with populations larger than some cities, and surviving in the harshest of conditions, it is no wonder that penguins are seen as the emblem of Antarctica.  However, of the 17 different species of penguin, only two (emperor and Adélie) make the Antarctic continent their true home, although others (chinstrap, gentoo and macaroni) breed on the northern tip of the Antarctic Peninsula, where conditions are less harsh. King penguins only breed on the warmer more northerly subantarctic islands. One species, the Galapagos penguin, even lives on the equator. According to the IUCN, the Chinstrap Penguin is classified as Least Concern and the Adelie Penguin is classified as Near Threatened.

So why are these penguins disappearing? According to a June 2014 article in the Guardian, emperor penguin numbers could fall by a third by the end of the 21st century. We often talk about biodiversity in the YPTE news but then, that’s probably because it’s one of the most important aspects of life for all living creatures.  The more different types of animals and plants there are in one area or habitat, the greater its biodiversity and the healthier it is.  Animals (including humans) and plants work together for survival (even if they don't realise it themselves!) and we all help each other along the way.  In this way everything in an ecosystem is connected.  Climate also plays a major part.

It is easy to see these sorts of connection in action by looking at why the numbers of these penguins might be falling.  Let’s take a look at some of the reasons behind their decline.  Climate change is causing temperatures to rise on some parts of the planet and one of the fastest warming areas on the planet is the West Antarctic Peninsular.  Warming sea temperatures here are melting the ice, which provides a habitat for a lot of wildlife.  Here’s a closer look at the connections - penguins eat a type of shrimp called krill, and the krill eat a type of algae called phytoplankton, and this algae grows on ice.

So if the ice is disappearing then the algae is also vanishing, which means that the krill have less food and can’t survive in big numbers, which in turn means less food is available for penguins.  Krill grows to about 6cm long and there are said to be more krill on the planet than any other species.  Krill are extremely important to the world's ecosystem as they form the basis for the marine food web.

Another reason for the decline in penguins and krill is that whale and fur seal populations have been growing in this area since international hunting bans have come into force.  Seals and whales also rely on krill for food, which means that if there are more of them eating krill, then there's less for the penguins to eat.  The US team that has been studying the penguins for 80 years say that the penguins have helped to highlight this bigger problem within the ecosystem.  If they hadn't been studying the penguins, the problem of declining krill may have gone unnoticed.