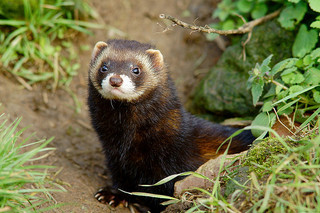 Distribution: mainly in Wales but spreading. Widespread throughout the rest of Europe, as far north as southern Sweden & southern Finland.

Habitat: variety of habitats but most often found in woodlands & hedgerows.

Weight: male up to 1.5kg. Female a little over half this.

Life-span: up to five years or more. 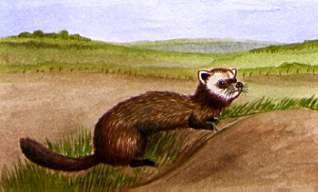 The polecat was once a very common mammal throughout Britain, even found in the outskirts of London, at the beginning of the nineteenth century. However, by the end of the nineteenth century, persecution by gamekeepers and fur trappers had reduced it to a few isolated populations in central Wales. At the end of the 20th century polecats were found as far north as Manchester, as far south as Wiltshire, and as far east as Derbyshire, Leicestershire, Oxfordshire, and Berkshire. A survey in 2004-2006 showed that polecats have continued into central and southern England.

The polecat was once considered as a threat to game and poultry and poultry-killing may be justified to some extent. However, gamekeepers and farmers, who trapped polecats mercilessly, rarely considered that predators like polecats probably help to keep the populations of rats and mice under control. The enormous reduction in polecat numbers might have contributed in the past to the huge increase in the populations of rats.

The polecat was also trapped for its fur, known as 'fitch', which was widely used in the early nineteenth century. Records show that a total of 400 polecat pelts were sold at the old Fur Fair in Dumfries, Scotland, in 1829, and 600 in 1831. In 1866, however, the number of furs for sale there was only six, after which they were not included in the records.

Many years ago, polecat-hunting was practised among the country squires of North Wales, Cheshire, Cumberland and Westmorland, where special packs of hounds were kept to hunt them down.

The Vincent Wildlife Trust carried out a national polecat survey in 2015.  To find out the results, visit: https://www.vwt.org.uk/wp-content/uploads/2016/04/Polecat-Report-2016.pdf

The polecat used to be called a 'foul mart' because of its strong smell. The name polecat is said to be from the French poule chat,'the chicken cat' and it will kill chickens given the chance! Ferrets are creamy-white, domesticated polecats used to catch rabbits, and some escape or are lost. Many of these ferrets have reverted to polecat colouring over the generations and are known as polecat-ferrets, though they usually have a paler forehead and no mask. They also interbreed with true polecats so polecats vary in colour depending on how much ferret and how much true polecat is in their ancestry. Polecat-ferrets are found throughout Britain.