The puffin's distinctive bill has given it the nicknames of 'sea parrot' and 'bottle nose'. Although it looks a bit like a penguin or a parrot, it is actually related to the auk family - its close, larger relatives being razorbills and guillemots. 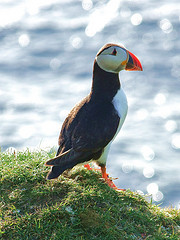 The puffin's distinctive bill has given it the nicknames of 'sea parrot' and 'bottle nose'. Although it looks a bit like a penguin or a parrot, it is actually related to the auk family - its close, larger relatives being razorbills and guillemots.

Daily Life: for most of the year, when not breeding, puffins are to be found bobbing about on the waters of the Atlantic and Arctic Oceans, often hundreds of kilometres from land. They are found mostly singly or in pairs. The puffin is perfectly adapted to a marine environment; it keeps its feathers waterproof by applying oil, from a gland near its tail, as it preens. To catch food, the puffin dives from the water's surface, using its wings like paddles to 'fly' down to great depths to catch sand eels or other fish. Underwater, a puffin looks to be swimming in a silvery air bubble because the air in the feathers is partly forced out.

The puffin's large beak and mouth has backward pointing spikes which enable it to catch as many as ten small fish one after the other, without swallowing them, and hold them crosswise. In winter the face is darker and the bill rather dull in colour, but they become more colourful in the spring in preparation for the mating season.

On the island of St. Kilda in the North Atlantic, puffins were once used to flavour porridge! However, today they are a protected bird, although numbers have been declining since the 1960s when chemical and oil pollution of the sea killed many puffins; some traditional colonies were deserted as the numbers fell.

Puffin numbers are decreasing rapidly.  Conservationists are concerned about the overfishing of sand eels and whitebait by humans which is thought to be resulting in the starvation and death of many seabirds, including the puffin.  Climate change is also having an impact, causing more frequent and intense shifts in sea temperatures, thermal mixing and extreme weather, all of which affect their prey species of sand eels, sprats and other small fish.  As a result in October 2015 the IUCN has reclassified puffins as Endangered.

In 2018, the National Trust's 5-yearly survey of the population on the Farne Islands off the Northumberland coast of the UK has found that puffin numbers have fallen by 12% on average since 2013, when there were 39,962 breeding pairs on the archipelago.  The population on one of the islands, Brownsman, has reduced by 42%, raising fears that puffins could be extinct in the Farne Islands within the next 50 to 100 years.

Join the Pufferazzi by sending in a photo of any puffin from any colony that you have seen carrying food in its beak! https://www.rspb.org.uk/reserves-and-events/events-dates-and-inspiration/puffarazzi/

A puffin colony sometimes has several thousand pairs. The birds usually pair for life, though they are not necessarily together all year round. The puffins may dig a shallow burrow, about 2 metres long, in the soft turf on cliff tops and islands, or use an old rabbit burrow. They return to the same burrow every year. On land, the pairs strengthen their bond by preening each other and tossing their heads. The males often present the females with gifts of grass or feathers.

A single egg is laid in a chamber at the end of the burrow and both parents take turns to incubate it which take 39 days. The newly hatched chick (or puffling) is covered in dark brown down and has a small black bill. Its parents share the task of feeding it, flying out to sea to catch beakfuls of sand eels. After about 40 days, the chick is deserted and stays in it burrow for 7 - 10 days, without food, whilst its adult feathers develop.

Leaving the burrow is a dangerous time for the young puffin, so it emerges at night to avoid hungry gulls. It cannot yet fly, so it tumbles down the cliff face and swims as far out to sea as possible before daybreak. It then starts learning to fly and fish. The following year, the young puffin returns to the colony, although it does not breed until it is four or five years old.

Off the United Kingdom, there are large puffin colonies in the Outer Hebrides in the north of Scotland, Skomer Island in Pembrokeshire, Bempton on Humberside and Portland Bill in Dorset.