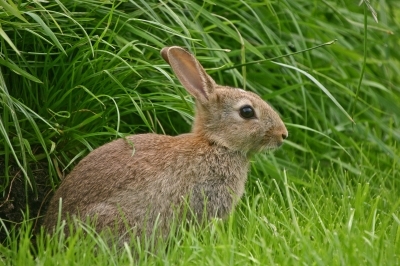 Rabbits are sociable animals and live in colonies in burrow systems known as warrens. A warren is dug to a depth of 3 metres, may cover a large area and has many entrances. The inside is a maze of interconnecting tunnels, living quarters and nesting chambers

Usually there is a dominant doe within the colony and she will fight other does for the best nest site. Dominant bucks run up and down the boundary lines of their territories, marking as they go; they may do this by depositing droppings on top of an anthill, scratching out shallow scrapes in the ground, or rubbing the ground with the chin to mark the place with scent from glands. Dominant rabbits are the most successful at breeding.

Subordinate rabbits do not establish a territory and they mix happily with other subordinates. They are, however, driven off if they venture into the territory of a dominant rabbit.

Rabbits are mainly nocturnal, emerging from their burrows at dawn and dusk, although on warm, sunny days, or in undisturbed places, they may be out during broad daylight. Feeding takes place close to the warren, so the vegetation around it is kept short by grazing. The rabbit, having many enemies, is always on the alert for danger. If a rabbit spots danger, it will warn others by thumping with a hind foot. A flash of white from under its tail as it runs for a burrow also acts as an alarm signal. The rabbit's prominent eyes are set so that it can see over a wide area.

Most of the day is spent underground, resting and passing soft, almost black droppings; these they then eat so that more nourishment can be extracted from them. The rabbits then produce hard, pellet-like droppings above ground, usually in a special 'latrine'.

Rabbits keep themselves clean by washing regularly and grooming, using their teeth, tongue and claws.

"Breed like rabbits" is a common expression and rabbits are indeed prolific breeders! In one year, a doe can produce more than 20 offspring and many of these will breed themselves when only 4 months old. Spring and summer are the main reproductive periods, but breeding can start in January.

The babies (kits) are born in special nests made by the doe which is in a dead end burrow, often separate from the main warren. The doe makes a nest from grass or straw and lines it with fur plucked from her chest. After a gestation period (time between mating and birth) of 28 - 31 days, a litter of 3 - 8 babies is born. At birth they are blind, deaf, hairless and hardly able to move for their first week. Their mother visits them for only a few minutes every 24 hours to suckle them and then she seals off the nesting chamber with soil.

By the eighth day, the young are covered with fur and two days later their eyes open. By the sixteenth day, they have ventured out of the burrow and started to eat solid food. They are weaned and independent at 30 days. Their mother will already have mated and be expecting another litter.

This prolific breeding is normally balanced by many deaths caused by predators, road traffic, shooting and trapping. Apart from humans, rabbits' predators include foxes, badgers, stoats, weasels, buzzards and cats.

Humans have been the rabbit's main enemy since it has been regarded as a major pest for the last 200 years. Rabbits cause a lot of damage to crops, gardens and the countryside. Earlier last century, when the rabbit population was much larger, they caused such extensive damage to crops and trees that they were included in the Pests Act 1954.

In 1954, a flea-carried virus called myxomatosis was introduced to the wild rabbit population and this killed more than 95% of Britain's rabbits. Myxomatosis is a distressing disease, affecting the eyes and brain. The drastic reduction in rabbit numbers also caused a decline in the number of foxes, buzzards and other predators as well as affecting the growth of vegetation; unwanted plants such as gorse, bramble and coarse grasses were encouraged to grow. However, rabbits started to become more common again, having developed a resistance to the virus. Populations in some areas are occasionally affected by new strains of the virus.

Another rabbit virus, known as VHD (Viral Haemorrhagic Disease) and RCV (Rabbit Calicivirus) has also broken out in many countries. This is a highly infectious and lethal form of viral hepatitis that affects European rabbits. Some viral strains also affect hares and cottontail rabbits. Mortality rates generally range from 70 to 100 percent. The disease can live on the ground for many days and can be passed to other rabbits who pass by. First reported in China in 1984, the RNA virus then spread to 40 countries and is now endemic in most parts of the world.

Even though rabbits are once again causing damage to crops and forest plantations, they are providing their predators with much needed food. Also, without rabbits, much of our downland and cliff tops would be overgrown with gorse, bramble and hawthorn scrub. Rabbits suppress the growth of shrubs by nibbling the growing shoots; the resulting turf encourages the growth of low-growing plants such as vetches and trefoils. In turn, these small flowering plants attract many butterflies and the short grass is suitable for other insects such as ants. The insects in turn attract many species of birds.