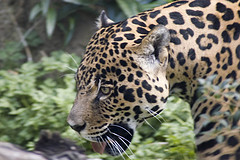 A fully grown male measuring up to 8ft from nose to tip of tail. It is a heavier animal than the leopards of Africa and Asia although similar in size. The jaguar differs from the leopard in having a more powerful head, shorter tail and shout stout legs. It is found on the edges of forests and often beside rivers from the southern United States to northern Argentina. Unlike most cats it seems to like water and obviously enjoys swimming. It will even fish with its paws. The diet of the jaguar includes capybaras, peccaries, deer, agoutis, tapir and fish. Heavily hunted by humans for its skin, the jaguar is steadily declining in numbers - and the destruction of the rain forests will speed this decline considerably.