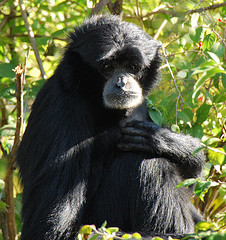 The siamang is the largest of the seven kinds of gibbon, all of which live in the rain forests of southern Asia. Gibbons are the smallest members of the Ape family and they spend most of their life up in the trees. Their arm over arm movement through the tree tops (known as brachiation) has resulted in the gibbon having very long arms and rather short legs. The saimang stands about 3 feet tall, but their arm-span may be 5 feet. Alone among the gibbons, the siamang has a huge vocal sac on the throat which helps to produce a very loud (and often blood curdling) call. Food consists of fruit, leaves, insects, young birds and eggs.