What are the Threats to the Rainforests?

What are the Threats to the Rainforests?

The disappearance of the forest is called deforestation. As populations have grown and demands for land and timber have grown greater, so the deforestation has accelerated.  Current rates of deforestation amount to about 6 million hectares a year.  That about 8.5 million football pitches.

Rainforests are the world's most spectacular ecosystems. An ecosystem is not just the plants, but also the birds, mammals, reptiles, fish, amphibians, invertebrates, bacteria, and even the non-living elements like soil, water and air.  In some cases their climates have remained stable for the last 65 million years. This means that they have developed arrays of life unequalled by any other ecosystems on the planet. The destruction of the rainforests will affect other ecosystems throughout the world.

Humans have cut down trees for thousands of years, yet concern over deforestation is fairly recent. The rate at which the forests have been cleared has accelerated during the latter part of the 20th and into the 21st century. Since the end of the Second World War about half the world's rainforest has been felled. Gradually, the rainforest has gained the attention of the worldwide media, making most of us aware of the problems.

Forests are destroyed for a number of reasons:-

1) The growth of populations in countries with rainforest.

2) An increase in worldwide demand for tropical hardwoods has put a greater strain on the rainforests. 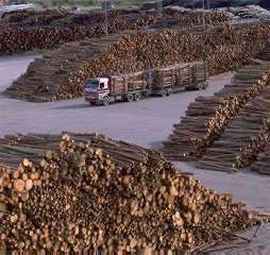 Fortunes can be made in the rainforest. Hardwoods like mahogany and teak are very valuable, and can be sold for a great profit.  The money that can be made is only available in the short-term. Once an area of forest is cleared, it will probably never recover. When a 35 metre tree is felled, it can crush up to 17 smaller trees as it crashes to the ground. There may be only two or three commercially viable trees in an area of forest the size of two football pitches.  Trees are also cut down for wood pulp, which until recently came only from softwoods like Canadian conifers.  The pulp is used to make paper.

In West Africa, almost 90% of the rainforest has been destroyed and now the logging is spreading to Central Africa.

Road building through rainforests is another problem, making illegal logging and the poaching of animals much easier.  In Africa apes such as gorillas and other animals are hunted for bushmeat to be sold by roadsides and in the markets.  Many apes are vulnerable to diseases.

An estimated 70 - 80% of logging in Brazil and Indonesia is illegal.  About 1/10 of wood used in the timber trade worldwide is illegal.  To avoid buying this wood in the UK, the most recognised and trustworthy standard is the Forestry Stewardship Council logo on wood and paper products which ensures the source was from sustainably managed forests.

Brazil is the world’s largest exporter of beef with more cattle (232 million) than people (210 million in 2020)!  After logging and/or burning of the rainforest, cleared land is sold to local farmers for cattle grazing.

80% of deforested areas in Brazil are used for cattle ranching and are the greatest source of carbon emissions in Brazil.  Not only that but the cattle naturally produce large quantities of methane, another “greenhouse gas” approximately 26 times more effective than CO2.

Most of the beef in the UK is not sourced from Brazil.  However, livestock can still be indirectly responsible for rainforest destruction since intensively farmed animals in the UK are fed a high protein plant called soya.   China, with its growing demands for beef has in recent years become the largest consumer of soya from Brazil.  Most of the world's soya comes from South America where areas of rainforest, as well as other habitats like the savannahs have been planted with this crop.

At first the land may be very productive.  However, in any rainforest it is only the top layer of soil, known as the “topsoil” that is fertile.  Eventually the good topsoil will be washed away by the rains within three or four years and the area may become a desert.  Otherwise farmers may resort to using more and more fertilizers and pesticides which bring with them their own problems such as the pollution of rivers.  Soy plants may also be genetically modified - still a controversial issue.

Have you heard of palm oil?  How about vegetable oil or olive oil?  Oils from plants, vegetables, seeds and nuts have been used for centuries all over the world for many different foods and products.  Oil palms are palm trees which grow hundreds of little orange/red fruits that are squashed, squeezed and pulped to produce palm oil.  It is estimated that 33% of all the products in your local supermarket contain palm oil - that’s a lot of products!  It is used in bread, cereals, chocolates, pizzas, cleaning products, chewing gum and even shampoo.

Sometimes land is cleared so that it can be replanted with valuable cash crops such as the oil palm plant, which produces palm oil.  It can also be used as a biofuel instead of petrol or diesel. Indonesia and Malaysia together produce more than 80 percent of the world’s palm oil.  Palm oil production is such a huge business in Malaysia and Indonesia that the latter has gained the title of “World’s Fastest Rainforest Destroyer” in the Guiness Book of World Records!

Valuable trees are harvested and the rest are burnt to clear the land for the farming of palm oil.  As the soil’s fertility does not last forever, the people at the head of logging companies avoid bankruptcy by buying up new areas of forest.   Burning the trees and the peatlands beneath them is highly polluting (see below) although the ash improves the soil’s fertility before planting.

In burning the rainforests Indonesia is also burning the peatlands below which store masses of carbon.  Their peatlands cover just 0.1% of the earth’s land, yet contribute to 4% of the world’s greenhouse gases. This makes Indonesia the country with the 3rd largest carbon footprint in the world, when deforestation is taken into account!  Bio-fuel targets in Europe mean that demand for palm oil is set to increase, despite the fact that more pollution is caused producing bio-fuels than is saved by not using petrol and diesel.

Cats, dogs, pigs, cows and goldfish.  Some are pets, some are farm animals which provide us with food or milk, but one thing they do have in common - they are contributing to the destruction of Asia’s rainforests.

At the centre of the oil palm fruits, much like a nectarine, there is a stone, or ‘kernel’ and this is chopped and mashed up to produce the high protein ingredient palm kernel meal.

All the way from Asia, pets all over the country are eating food containing palm kernel meal.  Imported products are products grown or made in other countries and then shipped to the UK, the opposite of this is exports - products made in the UK and sent to other countries.  Many of the food companies importing palm oil for use in our foods choose ‘sustainable’ sources which means that more care and responsibility is taken and areas rich in wildlife and animals are protected.  But when it comes to the palm kernel meal used in pet food there’s a different story.

The UK uses a considerable 10% of the global supply in palm kernel meal, and 80% of this is used in animal feed.  The problem is that 0% of the ingredient is sourced from sustainable sources, which means that farmers could be destroying the most species-rich rainforests in the world. One victim of palm oil plantations is the orangutan. Sadly, experts believe deforestation for palm oil is the single greatest threat to orangutans in the wild.

The Sumatran Orangutan is listed as “critically endangered” and the Bornean Orangutan as “endangered”.  According to the IUCN, over the last ten years their numbers have halved and up to 5000 are killed every year, despite their status as protected species.  See our orangutan factsheet below for more information.

In Britain we destroyed our ancient forests thousands of years ago and used the land for farming. But we now know more about the important role that forests, especially rainforests play.

In a way Europe is contributing to the rainforests’ destruction as nearly a third of Brazil’s soy bean harvest is exported to Europe including Britain where 78% of the soya beans are imported form Brazil.  97% of the soya meal produced worldwide is used for animal feed and much of that is not sustainably produced.

Beneath rainforests there often lies a wealth of natural resources in the form of mineral and gold deposits.  These are a great source of income for many countries, such as in Indonesia where mineral deposits form 19% of their exports.  Often people involved in small scale gold mining use mercury to extract the gold.  Mercury is banned in Indonesia but is readily available for purchase by individuals.  As well as damaging people's health, the mercury used goes on to pollute river systems and is the second-worse source of mercury pollution in the world, after the burning of fossil fuels.

Large areas of forest in Indonesia are protected by law against any prospecting or open cast mining, although new rules do allow underground mining in protected areas.  Once roads are built to reach the mines, it becomes easier for illegal logging and poaching to take place.

Brazil has the world's largest iron ore mine and has rich reserves of other metals such as zinc, nickel, tin and aluminium.  It is possible that some of its forests may be opened up for mineral exploration.

This renewable “green” source of energy, ironically is to blame for some environmental destruction, for example in the Amazon when the Tucuri dam was built.  The Amazon river is the second longest in the world and with its many tributaries it is a source of energy which could be harnessed.  Brazil suffered an energy crisis in 2006 and is keen to develop this source of power.  Unfortunately, the building of hydro-electric dams often results in major flooding which harms wildlife and can change the eco-system of the river downstream.  Wood rotting underwater also releases carbon dioxide and methane greenhouse gases.

The Xingu river is the site of the world's third largest hydro-electric dam, the Belo Monte project where 310 square miles (500 square km) will be flooded.  Many indigenous people such as the Kayapo Indians are concerned about the potential loss of land.  The construction was completed in 2019.

The big companies and governments who propose these developments of the rainforest usually offer incentives for the affected people such as jobs, schools and clinics.  Many feel this is a good exchange and may improve their standard of living, although the reality can be far from that.  In many cases, promised compensation is not delivered.

On the contrary, burning the rainforest is like creating a huge bonfire, throwing massive amounts of carbon dioxide into the atmosphere.  Carbon dioxide or CO2 is a 'greenhouse gas', which helps to retain the heat of the sun within the Earth's atmosphere.   Tropical deforestation contributes 17% of the world’s annual greenhouse gas emissions.

By burning the rainforest, we are not only adding huge amounts of CO2 to the atmosphere, but we are also reducing nature's ability to absorb CO2 and to produce oxygen. The more the rainforests are cut down and burned, the more the 'lungs' of the earth will be damaged.

Deforestation is responsibly for more global carbon emissions than all the planes, trains, buses and cars in the world put together!  Indonesia is already the world’s third highest emitter of carbon dioxide after the USA and China because of the burning of its rainforests and peat lands to clear areas for growing palm oil.

Rainforests also help to transport huge volumes of water vapour through the atmosphere in 'flying rivers'.  Water falls on the rainforests, is absorbed by the trees and then evaporated from their leaves in a process called transpiration.  When the trees are removed, the flying rivers stop flowing.