Wind comes indirectly from the sun.  As air heats up it moves around the planet as wind.  The power of the wind has always been harnessed by humans for centuries, whether it has been to power sailing ships, to turn the blades of a traditional windmill to grind grain for flour or to pump water.  The first windmills appeared in Persia about 200 years before Christ.  It was not until a thousand years later that they appeared in Europe.  It is from those early windmills that we got the idea of using modern wind turbines to create energy. 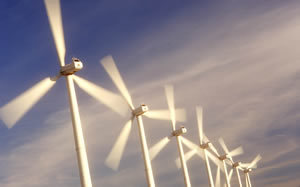 Wind turbines consist of 2 or 3 blades on the top of a tall pole which can be turned to face the wind.  Behind the blades is a turbine which is operated when the wind turns the blades.  They need an average wind speed of 25km per hour but can turn at over 100 mph!  The turbine is connected to a generator and this is where the energy can be turned into electricity.  A group of wind turbines is called a wind farm.  There can be up to 100 turbines in a farm.

Wind power is one of the most popular forms of renewable energy. At the end of 2020, onshore wind capacity represented 29.8 per cent of all renewable capacity, the highest share of renewable technologies.  There is no fuel involved so once they’re up and running they make no air pollution.  Of course fossil fuels are used to make the turbines in the first place out of steel, aluminium and concrete but the turbines can replace this amount of electricity after about 9 months of use.  They can also be taken down without leaving a scar on the landscape.

There is no shortage of wind but you can’t guarantee from one day to another how much wind there will be so you can’t get rid of fossil fuel power stations all together.    But what they do mean is that we don’t need to use fossil fuels as much so they still reduce the amount of pollution that they give out.  It is clean and produces no greenhouse gases.  In the UK wind farms produce twice as much electricity in the winter as they do in the summer, and it is in the winter when demand is highest.

They are not particularly efficient yet - you still need lots of them to make electricity. The turbines can be costly to maintain so at the moment the price of the electricity they produce is quite expensive but it should get cheaper.  Denmark meets over 28% of its electricity needs through the use of wind turbines and hope by 2030 to generate 50% of it.  This gives more people jobs than fishing!

Wind turbines need to be put in windy places.  Whilst sometimes this can be out to sea, this can be expensive.  Other times it may be on a hill top or a wide open space where there is little shelter.  Most of them are located away from highly populated areas in Cornwall and Wales.  However in some remote locations in Scotland, wind turbines have been standing idle because they haven’t been connected to the national grid which is where the electricity they produce needs to go in order to be sent to different towns. Plans to build the world's largest off shore wind farm off the Yorkshire coast have been given the go ahead by the UK Government. The Dogger Bank project, to be built from 2020 in a joint venture between SSE and Norway’s Equinor, will be the largest wind farm in the world once it begins generating power in 2023.

Wind turbines can be 8m high and often cause disagreements as many people think that they are ugly and spoil the natural landscape. Others think they add to the landscape - how much of our landscape has been influenced by humans?  “Shadow flicker” is caused by the blades reflecting light and casting shadows as they move.  This has been blamed as the cause of a few road accidents when it distracted the drivers.  At night the aircraft warning lights also create some light pollution in otherwise dark areas.  People found the old-fashioned turbines noisy because they made a constant swooshing noise and have been blamed for giving people headaches.  They are much quieter these days and it is said that coal-fired power stations would make the same amount of noise.

Wooded areas have to be cleared to allow the wind through and they sometimes use up farmland space but farmers can lease the land and they can still use the land to grow crops or graze their sheep and cattle.  The construction of wind turbines has occasionally caused landslides or sediment which could pollute rivers in the short-term.

Wind farms are said to kill birds, especially when they get in the way of migratory ones and birds of prey.  There are similar worries over bats.  However studies suggest that the amount of birds killed is negligible compared to the many other ways they could get killed as a result of human activity such as hunting and collisions with power lines and high rise buildings.  In the UK there is estimated to be 1 bird killed by every turbine each year, but as many as 10 million birds are killed by cars.  The RSPB (Royal Society for the Protection of Birds) supports the sensible placing of wind turbines.  After all the effects of climate change on birds’ habitats and their feeding patterns could be far worse.

Wind speed is higher over open water so it is better that they be put out at sea where they are less visible too.  The power is taken to land via an underwater cable.

Off-shore wind farms don’t get the usual complaints since they are placed about 5 miles out to sea where no-one can see them.  Studies are still looking into the effects of noise on sea mammals such as whales to see if it causes them stress or scares away their prey.  On the other hand the turbines’ poles under the water could encourage natural growth of mini-reefs (in the same way as a ship wreck would) which would attract more aquatic life.

There are plans to build the world’s biggest wind farm off the coast of England.  This time the objections come from the British Ministry of Defence who argue that it would make it impossible to spot low flying air craft on their radar.

Britain is the windiest place in Europe but is way behind many other countries in its use of wind power.  Some people are even doing it themselves by placing mini turbines on their houses to reduce their electricity bills!  See www.energysavingtrust.org.uk