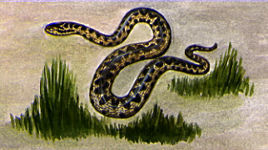 Why Does Britain Have so few Reptiles?

Both amphibians and reptiles are cold-blooded (ectothermic) animals. This means that they cannot regulate their body temperature without the warmth of the sun, they need to bask in sunlight, or on a warm rock in order to survive. The relatively cool climate and the fact that Britain is an island have contributed to the paucity of British amphibian and reptile fauna. The English Channel has been the main barrier to the invasion of these animals from continental Europe, which has over 80 species.

What is a Reptile?

Of the living groups of reptiles (tuatara, crocodilians, turtles, snakes and lizards) only snakes and lizards are represented in Britain. Unlike amphibians, reptiles have no larval forms. The young are either born alive (viviparous) like the adder and common lizard, or hatch from eggs (ovoviviparous) like the grass snake and sand lizard. Reptiles bodies are covered with scales, or bony plates (such as the shell of a tortoise). Lizards periodically shed their skins in flakes, while snakes cast off theirs as a single slough. They are cold blooded and need an external source of heat, such as the sun, to regulate their body temperature.