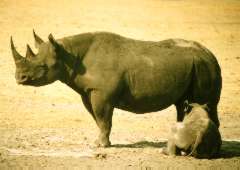 The fight will have to be continued for several years to come if we wish to prevent our remaining wild rhinos from disappearing for ever!

Approximate numbers of rhinos -
While there's no exact number, experts believe that only 27,000 to 30,000 rhinos are still alive today. “Two species are African: the black rhino, with 5,500 animals left, and the white rhino, with [around] 18,000 animals left,” says Emma Pereira, Communications Manager at Save the Rhino International.