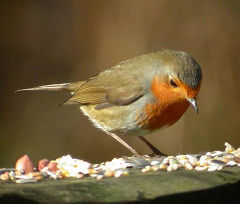 Distribution: all over Europe, except for parts of the Mediterranean coast and northern Scandinavia. Also found in the Azores, Canary Islands and parts of North Africa; eastwards into central Russia, Turkey and Iran.

The robin is a popular visitor to gardens and is well-known for its tameness - with patience it can even be encouraged to eat from the hand. Robins living elsewhere in Europe are much more wary of humans because there they are shot in their thousands for food or sport.

Robins are very possessive of their territories, even the female has a territory of her own in winter. The male marks out the boundaries of his territory by singing loudly, especially in the spring. Males will fight fiercely with one another to defend their territories, sometimes to the death.

Robins spend quite a lot of their day hopping on the ground, searching for food, often flicking their wings as they do so. If you start digging in the garden you are almost certain to attract a robin, which will perch on a nearby fence or branch, waiting to inspect the newly-turned soil for grubs and worms. In the winter they will regularly visit a bird-table to eat kitchen scraps. In cold spells a robin will puff up its feathers to help keep warm. Robins are usually more secretive in the late summer when they are moulting and they sing less frequently at this time.

The male robin sings loudly in the early spring, hoping to attract a mate into his territory. When a partner has been found, the male brings his mate tasty bits of food which she begs from him with quivering wings - this strengthens the pair bond.

The female builds the nest, usually amongst bushes or in ivy on trees, or in holes in walls, making a domed structure from leaves and grass, and lining it with roots, feathers and hair. However, robins often nest in unusual places such as old teapots, kettles, pans and inside sheds and garages.

Mating occurs mainly from late March to June - robins sometimes even nest as early as January. The female lays 5 - 7 eggs which are whitish, lightly mottled with red-brown patches and spots. She incubates them for 12 - 15 days, whilst her mate brings her food at frequent intervals.

When the eggs have hatched, both parents share the task of feeding the young, taking care of them for about three weeks, by which time they can fly and are independent. The baby robins are brown with spotted chests.

If the first brood has been an early one, then the parents are likely to raise a second or third brood. Quite often the male takes over the feeding of the first fledglings while the female sits on a second clutch of eggs.

Within the first two months after fledging, the young robins undergo their first moult and the adult plumage replaces the body feathers. The wing and tail feathers are moulted the following year.

Nearly three-quarters of young robins die before they are one year old, most of them being caught by predators. The ones lucky enough to survive will establish their own territories before winter. 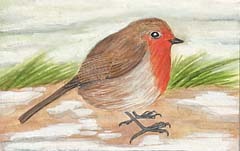