The grey seal is Britain's largest carnivorous mammal. Its thick, insulating layer of blubber and waterproof fur allow it to survive in cold water temperatures. 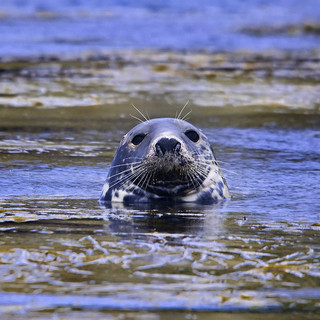 Distribution: Widespread in the north-east Atlantic, from Spitzbergen to southern Iceland with the largest numbers in British waters.

The grey seal is Britain's largest carnivorous mammal. Its thick, insulating layer of blubber and waterproof fur allow it to survive in cold water temperatures that would kill a human within minutes.

When at sea, grey seals hunt alone; it is only on land that they congregate, often in their thousands. The seal's large eyes enable it to see well in dark, murky waters, but it uses its highly sensitive ears mostly when hunting for its prey. Even a blind seal has no trouble catching prey. You cannot easily see a grey seal's ears because there are no external ear flaps. The seal can close its ear openings when diving to keep water out.

As well as the ears, the seal's sensitive whiskers help it to detect prey, feeling the slightest vibration. Once a fish has been detected, the grey seal gives chase, its streamlined body allowing it to swim fast and with agility. It is possible that fish can be followed by sensing changes in the chemical composition of the water.

A wide variety of open-sea and bottom-dwelling fish is eaten and in coastal waters, salmon, herring and flatfish are the types most commonly eaten. Occasionally, squid and crabs are eaten too.

The grey seal is able to stay underwater for up to 16 minutes, although five to ten minutes is more normal. A land-living mammal is unable to breathe underwater for so long, but the grey seal can do this because its blood contains high amounts of haemoglobin (the red blood pigment that carries oxygen around the body). The seal's heart rate slows down considerably during a long dive in order to conserve oxygen. 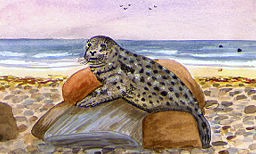 Grey seals breed from September to December around British shores. The female gives birth to a single pup on a shore (known as a rookery) crowded with hundreds of other seals. At birth the baby is covered with a thick, creamy-white coat, but this is replaced by a greyish juvenile coat after about three weeks.

The pup grows quickly on its mother's rich milk, and she abandons her offspring after three weeks, ready to mate again. The bulls (males) haul themselves onto the shore and fight each other to establish territories. The more mature, experienced bull usually wins any fight and he mates with all the females on his part of the beach.

After mating, the female returns to the sea, but the fertilised egg does not start developing until much later so the birth will be at the same time the following year.

The pups left on the beach, driven by hunger, soon take to the sea to find their first solid food. If they survive into adulthood, the males will be ready to breed at about eight years of age and the females at about five years.

Humans have hunted the grey seal for thousands of years. Its skin was used to make clothing, its blubber (fat) made into oil for lamps and its flesh was eaten.

Later, the grey seal was culled around British shores because fishermen claimed that it did much damage to fish stocks and nets. This culling has now largely stopped and the grey seal is protected by law. Fishermen still blame the grey seal for reducing the populations of salmon and cod in the North Sea, but many scientists say that this has been caused by years of overfishing and the seals do not seriously reduce stocks of fish.

The Grey Seal population in the UK is one of the most intensively monitored large mammal populations in the world.

Discover more about grey seals by following these links: