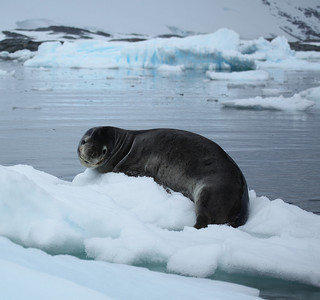 How does the Seal Move?

The leopard seal, like all true seals, is well-adapted for a life in an ocean habitat. It has a streamlined, torpedo-shaped body and propels itself through the water by moving its hind flippers from side to side. The front flippers are used for steering and they are very long which helps the seal to change direction quickly - important when chasing fast- swimming prey. It can swim at speeds up to 24 mph when chasing its penguin prey - a little faster than the fastest penguin. When in need of a rest, the seal hauls itself out onto the ice pack, but here it is awkard in its movements and takes the opportunity to recover from its exertions in the water.

Penguins have good cause to fear the leopard seal, which is a solitary and fierce predator, equipped with powerful jaws and long, inward curving, pointed teeth. The seal will 'patrol' the edges of the ice, under the water, keeping an eye on the surface for penguins. Penguins often show a marked reluctance to be among the first of a group to enter the water in case there is a leopard seal lurking about.

If the seal spots a penguin, it will attack at great speed, hoping to take the penguin by surprise. It may have to give chase, and, with luck, the seal manages to grab its exhausted victim in its fiercesome jaws. The seal shakes the penguin vigorously to tear off portions of flesh.

Although penguins are the leopard seal's usual prey, about half their diet consists of krill (tiny shrimp-like animals). The seal's teeth are saw-like and very sharp, ideal for tearing off flesh - but also useful as a sieve when catching krill. Fish, squid and seabirds are also eaten on occasion. A few leopard seals sometimes eat other seals, usually the smaller crab seal.

Leopard seal pups are born during the Antarctic summer, between November and January. The female hauls herself out onto the ice pack to give birth to her one pup. The females do not form colonies, unlike other seals. Before leaving the water, she eats much more food than usual, so she can survive the days following the birth without eating.

The new-born pup looks like a smaller version of its parents and does not have a white coat as the pups of other species do. It is 1.5 metres long and weighs about 26kg. The mother feeds her pup on milk rich in fat, which causes it to gain weight very quickly. At two or three weeks of age, the pup moults its first coat and takes to the sea. It now has to fend for itself and begins feeding on krill. Eventually it learns to catch fish and larger animals.

The mother seal mates with a bull seal when she returns to the sea, but the fertilised egg does not start developing straight away. This is called 'delayed implantation' and it will be three months before the egg becomes implanted in the female's uterus (womb). This ensures that the baby is not born until the weather has improved, the following summer - a gestation (pregnancy) of 240 days.

Female leopard seals are ready to breed when they are 2 - 6 years old. Males are ready at 3 - 7 years.

Although leopard seals have a ferocious reputation, they do not attack humans, unless provoked. They have been known to swim placidly with scientists who have been studying them. They are naturally inquisitive and this behaviour is seen as aggressive to some humans, and as a result they may be shot. The leopard seal population is estimated at around 500,000 individuals, and they are in no great danger at present. As with all marine life, pollution of the oceans may become a threat to their future.