A rock pool is like an attractive sea aquarium, an oasis at low tide for many animals and seaweeds. However, there are problems for the residents of a rock pool, particularly a shallow one. On a hot day, the sun will evaporate the surface water, making the water saltier than usual. When it rains the pool will become diluted. So a shallow pool on the upper shore will have less life than a deeper one on the middle or lower shore.

The best rock pools are those down on the shore, large and deep enough to prevent drastic changes in temperature on cold or hot days, ideally with overhanging areas and dark crannies. Such a pool will probably be full of life, although not all of it will be easily visible. A smaller pool is easier to investigate to start with.

The beautiful sea anemones are seen at their best in the deeper pools. They are very primitive animals related to jellyfish, stuck to rocks by a slimy disc. They can move around a little but usually just stay put, waving their tentacles to attract small fish or crustaceans within range of their tentacles. When a small animal is seized and enfolded in the tentacles, stinging cells paralyse the prey and it is swept into the mouth to be digested by special juices.

The beadlet anemone is the most common anemone. It is usually a deep red colour with purple blotches marking the positions of the stinging cells. It may be found on the upper shore, left high and dry at low tide, looking like a blob of red jelly, its mouth opening firmly closed, with tentacles tucked inside. This helps it to retain moisture while waiting for the next high tide.

Another beautiful anemone you may find is the snakelocks anemone, which has a mass of long, colourful tentacles, usually green tipped with purple. Unlike the beadlet anemone, it cannot retract its tentacles so is only found in pools on the middle and lower shore.

The crustaceans you are most likely to come across in a rock pool are the shore crab, hermit crab and common prawn.

The shore crab does not easily dry out so it can live under stones and in cracks well up the shore, as well as in pools. Adult crabs are green, but the young can be red or yellow with white patches. The crabs feed on small animals, dead or alive.

Unlike the familiar cooked prawn, a live prawn is not pink! The common prawn is a transparent greyish colour with coloured dots and lines visible inside. It has very long antennae and lives in rock pools on the lower shore. It may be seen swimming slowly along with its five pairs of swimming legs, tucking up its 10 walking legs to make the body more streamlined. If frightened it will suddenly shoot backwards and hide under the seaweed. The prawn scavenges for bits of seaweed and dead creatures, as well as capturing small live prey.

The common hermit crab is well known for its habit of living in empty mollusc shells. The smaller crabs live in the pools on the lower shore and the larger ones are found out in deeper water. Unlike other crabs, the hermit crab does not have a carapace but has a soft, unprotected abdomen which it hides away in an empty winkle or whelk shell. Every so often, as the crab grows, it has to shed its outer skin-like shell. To do this it squeezes itself out of its adopted shell, moults, then returns to the shell. The crab is very vulnerable to attack by predators at this stage, because it often finds that its old shell is too small and a larger one has to be looked for! 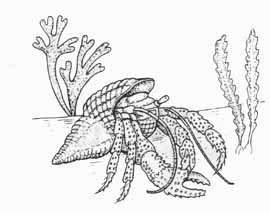 The abdomen of the hermit crab is coiled so that it fits in the coils of a shell. The adopted shell is asymmetrical so the crab’s right hand pincer is much larger than the left to enable it to close off the entrance to the shell when the crab is hiding inside. The walking legs are very strong to be able to carry both the crab and the shell. It walks slowly around the bottom of a pool scavenging for any dead plant or animal remains.

The only vertebrate animals you are likely to come across living in a rock pool are a few species of fish. Rock pool fish may be permanent residents or just visitors stranded by the tide.

The fish you are most likely to come across from the upper shore downwards is the common blenny or shanny. It has no scales but its body is protected by a thick layer of soft slime which helps it to slide amongst sharp rocks, and also helps to stop it drying out if stranded between tides on a drying beach. The shanny has a broad head with large eyes, and a dorsal fin which stretches almost from head to tail. Its colouring makes it difficult to spot when it is lying still on the bottom of a sunlit pool. Tough little teeth allow the shanny to crack open barnacles and even limpets.

You may find a goggle-eyed rock goby, which has two separate dorsal fins, hiding amongst seaweed as well as in pools.

Hidden away beneath a rock, or under a fringe of seaweed at the edge of a pool, may be a deep red fish called a rockling. This is a relative of the cod and it has barbs sticking out from its jaws. Both the goby and the rockling lie in wait for small animals, well camouflaged against their background.