When investigating a seashore it is important to remember that the welfare of the plants and animals must come first. If seaweeds are attached to rocks do not try to pull them off, just examine them where they are growing. Handle animals with great care, returning them to the place where they were found. Anemones and limpets are normally firmly stuck to rocks and any attempt to remove them may result in their death. Replace any large stones that are removed – animals that live on the underside soon die if left exposed.

Seas and seashores are under continual threat from pollution. Here are some examples:- 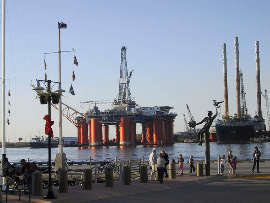 Oil spills, either accidental or deliberate, have a devastating effect on marine life, especially seabirds. Black tar-like oil washed up on a rocky shore would obviously completely destroy the entire community of living things. Chemicals used to disperse oil spills on a shore may effectively clean up the oil, but they can also cleanse the shore of life! The best policy for marine life is to physically remove as much oil as possible and leave the rest to degrade naturally. A rocky shore will recover much more quickly if chemicals are not used.

Sewage and litter also upsets seashore ecosystem, making them unsightly and perhaps contaminated. Some litter can be dangerous to wildlife.

Toxic chemicals and radioactive waste - a cocktail of toxic chemicals have found their way into the sea over the years, affecting both marine and human life. For many years potentially deadly radioactive waste from nuclear power stations and other sources was disposed of in the sea, and beaches have been contaminated by accidental leakages from nuclear power stations.