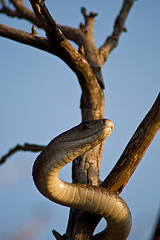 Black mambas spend their nights in holes in the ground - usually disused burrows - or hiding deep among fallen rocks or timber. These hiding places are also fled to by the snake if it becomes alarmed and it will attack any creature blocking the path to its hole. Black mambas use their incredible speed to escape threats, not hunt prey!

Like all reptiles, the black mamba is cold blooded, and relies on external heat to maintain its body temperature. Therefore, it frequently basks in the sun during the day, either on a low branch or a rock, but during the summer, the snake may be forced to take cover in its burrow if it becomes too hot.

Black mambas travel quickly across rough ground or along low tree branches when hunting. They are able to hold their heads up to 1m above the ground when striking and can hold them 50cm above the ground even when moving. They have very good eyesight and can strike their prey - rodents, bats, birds and lizards like lightning, leaving their powerful venom to finish off the kill.

The venom is injected through two hollow fangs at the front of its mouth which lie flat until the snake bites something, at which point small, movable mouth bones erect them. The venom causes rapid paralysis. Enzymes in the snake’s saliva start to digest the prey before it even reaches the stomach and most prey is digested within a few hours.

This takes place in spring and early summer. Males may travel long distances looking for females. Black mamba males wrestle over mating rights. The winner pins the loser's head to the ground! After mating, the snakes return to their own holes. Females lay between 10 and 25 eggs, usually in decaying vegetation. The decomposition of the vegetation gives off heat, which helps to warm the eggs and speed up hatching time. The shells of the eggs allow water and oxygen to reach the developing embryos.

Black mamba hatchlings are around 51cm long, and greyish-green in colour. They are independent immediately and can catch prey the size of a small rat. Within a year they reach 2m. Young mambas are eaten by mongooses, and even adult mambas are eaten by the secretary bird and larger species of eagle.