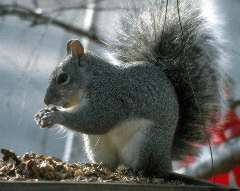 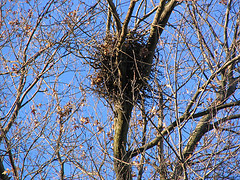 The grey squirrel is diurnal and most active at dawn and dusk, searching for available food.  Compared with the red squirrel, it spends more time foraging and feeding on the ground than in the trees.  It is, however, very agile in the trees and can run along slender twigs, leaping from tree to tree.  The long, muscular hind legs and short front legs help it to leap.  The hind feet, longer than the front, are double-jointed to help the squirrel scramble head first up and down the tree trunk.  Sharp claws are useful for gripping bark and the tail helps the squirrel to balance.  If a squirrel should fall, it can land safely from heights of about 9m (30ft).  The grey squirrel can leap more than 6 metres!

Squirrels have good eyesight and often sit upright on a vantage point to look around them. They have a keen sense of smell too!

The grey squirrel builds itself a nest, or drey, about the size of a football, made of twigs, often with the leaves still attached.  It is built fairly high in a tree and lined with dry grass, shredded bark, moss and feathers.  A summer drey is usually quite flimsy and lodged among small branches.  Sometimes the squirrel may make its nest in a hollow trunk or take over a rook's nest, constructing a roof for it.  A squirrel may build several dreys.

Although grey squirrels have a wide range of calls, they communicate mainly through their tails, using them as a signalling device; they twitch their tails if they are uneasy or suspicious.  Regular routes are scent-marked with urine and glandular secretions.  Squirrels identify each other, and food, by smell.

The grey squirrel does not hibernate and it cannot store enough energy to survive for long periods without food.  A larger, thicker winter drey is built, usually on a strong branch close to the trunk, and a squirrel will lie up in this in very cold weather, coming out now and then to search out hidden stores of food.  These stores of single nuts and other items are buried in the ground in autumn, well spread out.  They are found by smell, rather than memory.  Often they are not found at all and later may grow, helping the dispersal of trees.  Winter dreys are often shared for warmth.  As it sleeps, the squirrel curls its tail around its body to act as a blanket.

In late winter, squirrels may be seen courting, one, or more, chattering males chasing a female through the tree or across the ground.  Females can mate only twice a year, but males may mate at any time.  After mating, the male plays no part in the rearing of his young.

The female uses a winter drey as a maternity nest, or builds a new one.  She lines it with soft material and gives birth after a six week gestation period (time between mating and birth), in March/April and perhaps again in June/July.

An average litter has 3 babies but as many as 9 may be born.  The mother suckles the naked, blind young every three or four hours for several weeks.  They gradually grow fur, their eyes open and at about seven weeks old they follow their mother out on to the branches.  Gradually they start to eat solid food and when their teeth are fully grown, at 10 weeks, they give up suckling.  A month or so later they move away from the nest to build dreys of their own.  If there are not too many squirrels in the area, the young stay nearby; if it is crowded they will be chased away to look for less crowded feeding areas.

Grey squirrels breed for the first time at a year old. 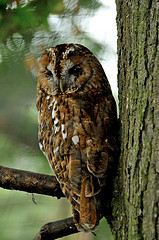