The red squirrel, the original 'Squirrel Nutkin' of Beatrix Potter fame, is one of our favourite British mammals but it is declining in numbers and classified as an endangered species. 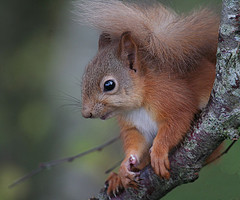 Habitat: Coniferous forests of Scotland and Wales; mixed woodland in England and Ireland.

Description: bushy tail; ear tufts; coat colour in adults can vary from cream, through all shades of red and brown to black. Ear tufts and tail may bleach to cream in summer.

Life-span: about 3 years, but up to 7 years possible.

The red squirrel, the original 'Squirrel Nutkin' of Beatrix Potter fame, is one of our favourite British mammals but it is declining in numbers and classified as an endangered species. The reason for its disappearance from most of its old deciduous woodland homes is largely down to the North American 'grey squirrel' (population 2million) that carries the virus parapox, deadly to our native red squirrels.  The slightly larger grey squirrel also directly competes with red squirrels for food and nesting sites.

The favourite habitat of the red squirrel is a large, mature Scots pine wood but they will also live in deciduous woodlands. The squirrels live mostly high up in the trees and build nests, dreys, in the forks of branches. Often two or three dreys are in use at any one time; these may be close together or wide apart, depending on the squirrels' range. Males may live in an area of up to 17 hectares (the size of 34 football pitches). In the winter and early spring squirrels of all ages and both males and females may share dreys but only if their territories overlap and they feed close together i.e. they know each other. Drey sharing usually stops in late spring and summer when the females are raising their young. 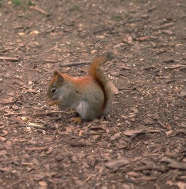 Red squirrels are diurnal and are active for much of the day, often from before dawn until it is dark, pausing only for a midday rest. They have few natural predators so can take the risk of being out in broad daylight. They escape attack from foxes and birds of prey by spending most of their time up in the trees. They forage on the ground for brief spells, particularly in autumn when they collect acorns, beech masts and other nuts to store for winter.

Squirrels hold food in their forepaws. A favourite food is pine cones; they bite the scales off the cones to get at the seeds. The ground under a pine tree may be littered with chewed cones and scales.

When squirrels are not feeding or resting, they are scratching (they are usually covered in fleas!) and washing.

Winter: during the autumn red squirrels eat as much as they can to put on fat reserves for winter. They put on about 12 per cent of their body weight in autumn fat whereas a grey squirrel can put on as much as 25 per cent.

The mating season often starts on warm days in January, the squirrels chasing each other through the branches. The female red squirrel may produce two litters in a good year, one in the spring (April) and the other in summer (August). There are, on average, three babies in a litter. The breeding drey is usually a little larger than normal with a thick, soft, grassy lining. The young are born blind and naked. If she is disturbed, she will carry the babies in her mouth, one by one, to another nest, which is sometimes quite a distance away.

As the young develop, the female spends more and more time away from the drey, and by the time they are three weeks old she may leave them for several hours at a time. The male takes no part in rearing the young.

At seven weeks the young begin to venture away from the nest and at eight to ten weeks they are weaned and become independent. Their fluffy, darker baby coats change into the adult colour.

The success of the breeding season i.e. the numbers of babies born and raised, depends on the seed crop of the main trees where they live. Where there are plenty of acorns, pine cones etc. squirrels build up a lot of body fat and many survive the winter in good condition. This means they will start breeding early in the next year and rear many babies. In a year when there is a shortage of tree seeds, the squirrels do not put on much fat and they may die from starvation or disease during the winter. Most of the survivors are not fit enough to breed successfully.

A lot more information about red squirrels will have to be gained through careful observation in the wild. In this way we may be able to decide exactly why they have declined so dramatically and work out ways in which we can help them recover. One way may be to provide extra food rations to help them over bad winters. Another way, as with the otter, may be to breed them in captivity and re-introduce some into protected, suitable habitats.

In January 2012 two new breeding enclosures for the red squirrel were opened in Norfolk.  These two sites brings the number of breeding areas up to 10 in a bid to increase red squirrel populations.  These controlled areas allow squirrels to be secluded from the threat of grey squirrels and other predators.

Threats to the Red Squirrel