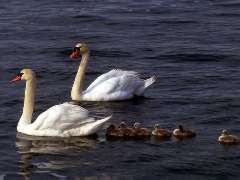 Mute swans pair for life and they mate and begin buiding a nest in March and April. Pair bonding takes place from the age of two although swans are not generally mature until three years old and may breed at this age if there is a territory available. The nest is built on the ground, near to water, in an undisturbed place.