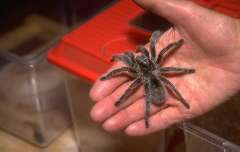 Despite their name, bird-eating spiders only rarely eat a bird. Instead they usually feed on small lizards, baby snakes, amphibians, especially tree frogs, and small mammals, such as rodents. Smaller forest tarantulas and most of the desert species prey mainly on insects.

The spider spears its prey with its long fangs, injecting poison into the victim which paralyses it. The spider crushes its meal between its strong jaws, which move in an up and down movement, injecting a liquid which digests the victim's tissues. The spider then absorbs the resulting pulpy liquid. Tarantulas eat poisonous baby snakes, pouncing on them before they can bite.

Despite their reputation as dangerous creatures, tarantulas are only ferocious when provoked. They have various ways of protecting themselves from their enemies. Some use an intimidating display by leaning back on their haunches, raising their head and legs and exposing their long curved fangs. This often frightens the enemy away! Other species turn their back on their attacker and squirt a nasty liquid into the predator's face. The spider may use its legs to scrape a stinging shower of very fine hairs from the top of its abdomen. Each hair is covered with tiny points and if they touch eyes or skin they can be painful and dangerous, even causing temporary blindness.

The defence tactics are used against such enemies as racoons, coatis and skunks which try to dig tarantulas out of their burrows, or birds, lizards or frogs which pick them up when out in the open.

Most tarantulas are quite placid and will only attack a human if goaded.

To help spiders climb they have tiny hairs on their feet that look like loo brushes, these act as hands which hold onto whatever they can.  Holding on is especially important for tarantulas.  Despite appearances tarantulas are actually very fragile and a fall from just a few inches could injure a tarantula's sensitive abdomen and even prove fatal.  But, scientists have wondered, how can these holding hairs support the weight of the heavier tarantula alone?

Spiders use all kinds of different silks for different purposes - to spin webs, make nests, protect their eggs, defend themselves, hang from ceilings and capture and wrap up their prey.  Unlike other spiders tarantulas don’t use their silk to spin webs but do use it to line their burrows.  Some scientists argued that they used silk from their spinnerets to make their feet sticky, but to discover the truth Claire Rind from the University of Newcastle led an experiment.  Tarantulas were put in glass boxes which were then turned leaving them clinging to the sides of the slippery surface.  Using microscopic slides and video footage they saw that only the arachnid's feet touched the glass, and where they had slipped slightly thirty to forty silken threads were left behind. But how do they know these threads came from the creepy crawly’s feet?

Using an electron microscope they then looked at the tarantulas feet and found tiny silk-producing taps or ‘spigots’ amongst the loo-brush hairs.  Spiders create silk by letting liquid out of little taps which they can turn on or off.  This liquid becomes solid as it leaves the spiders body and is used for a variety of purposes.  In the experiment the scientists examined several species of tarantula covering a broad spectrum of the tarantula family. The evidence strongly suggests that all tarantulas use silk-producing taps in their feet to 'hold on' in this way.

Different species of tarantulas mate at different times of the year. In desert areas, after a rainstorm, huge numbers of males may be seen at night, wandering around searching for females. Ground-living species enter the burrows of females to mate with them, whilst tree-living species find their mates by scent and by following the silken trails the females leave as they move.

The eggs develop in the female's body, or in an egg case which the female carries between her front legs. Up to 3,000 eggs may be laid, the larger spiders laying the most eggs. They take 2 - 3 weeks to hatch and the spiderlings spend the first few weeks of life in their mother's burrow or another safe place.

The young spiders may take many years to mature. The ones living in tropical forests take only 3 to 4 years but the American desert species can take up to 10 years.

As in all spiders, tarantulas moult their skin from time to time, as they grow.

Some species of tarantulas are becoming rare because they are threatened by over-collection as pets. The Peruvian pamphobetus antinous is decreasing because it is collected in enormous numbers for sale to tourists as an ornament. Species that live in tropical rainforests suffer from loss of habitat as the forests are destroyed. According to the IUCN
the Tarantula is now classificed as Critically Endangered.

Did you know? Bumba Lennoni is a tarantula species named after musician John Lennon!