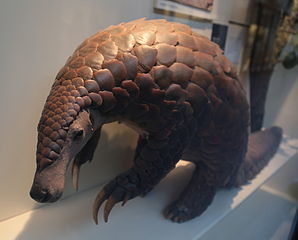 A shy, ant-eating creature, covered in scales, the pangolin curls into a ball when threatened, forming a suit of ‘armour’ from its scales. Ironically, the very body part designed to keep the pangolin safe from attack is leading to its decline. Demand for pangolin scales for use in traditional medicines has made this creature the most trafficked non human mammal in the world.  TRAFFIC estimate that one million pangolins were smuggled illegally between 2000 and 2013.

Pangolin scales, which are made of keratin, (the same material that makes rhino horns as well as our hair and fingernails) are offered in Chinese and other Eastern cultures as cures for everything from eating disorders to arthritis. In Vietnam, it is possible to obtain a prescription for the scales.

Restaurants also serve pangolin meat to customers who pay extra for a chance to eat a rare and endangered creature. The animals are often killed at the table so diners can see how fresh they are.

In Africa, pangolin meat and body parts are believed to convey many powers such as the ability to see the future or to protect people from attack. The scales are used to treat a range of illnesses including mental health problems, convulsions, inflammation and rheumatism.

There are 8 species of Pangolin in the world and all of them are in real trouble. The four species found in Asia are all listed by the IUCN as critically endangered and the four species from Africa are all vulnerable.  As numbers decline in the East, poachers and smugglers are beginning to hunt the African species. Two huge shipments of pangolin scales, each weighing 14 tonnes, were seized in Singapore in 2019. These scales, estimated to have come from around 72,000 pangolins, had been shipped from Nigeria.

CITES has placed restrictions on the pangolin market since 1975 and, in 2016, the 186 countries of CITES voted to move the pangolin to Appendix I and completely ban the commercial trade in the creature and its body parts.

In 2012, the IUCN’s Species Survival Commission formed a Pangolin Specialist Group made up of 100 experts from 25 countries.  Part of the pangolin’s problem was that it was not very well known and wasn’t considered a ‘cute’ animal to protect, so, in 2014 the Commission also set up World Pangolin Day, which falls on on February 15th each year.  Confiscated pangolin scales are sometimes burned in huge numbers to raise awareness and to remove the profits that could have been made from their illegal sale. Another problem for conservationists is that pangolins do not cope well in captivity, suffering from depression and seriously reduced lifespans. It is, therefore, hard to set up appropriate breeding programmes or study opportunities.  The future for the pangolin looks bleak for now.