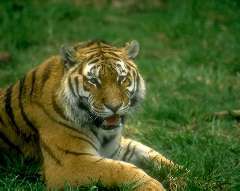 Fifty years ago there were eight subspecies of tiger, but three are now extinct. Today, all five remaining subspecies are endangered. According to the World Wildlife Fund, there are as few as 3,800 tigers left in the wild today, together with a further 7,000 in captivity. Many of the places breeding tigers claim to be zoos or conservation facilities but are, in fact, farms that sell the tigers to smugglers for huge profits. Tiger numbers are also declining because of the loss of their forest habitat and a shortage of prey.

All species of tiger are in demand by Eastern countries because of their belief that tiger bones, claws, teeth and most other body parts have medicinal properties. China, South Korea and Taiwan are the main consumers, but tiger products are also exported to Chinese communities in the rest of the world. China's own tigers are almost extinct so traders have turned to tigers in other countries and much illegal smuggling goes on.  Penalties for smuggling are very varied from country to country. In China, people found to be trafficking tigers are sent to prison, but in Indonesia, the same crime may meet with a only small fine.

Tigers are also sought after all over the world for their beautiful pelts, which are in demand for use as rugs and as hunting trophies.  They are also kept in countries such as the US as exotic pets. It is estimated that between 5,000 and 10,000 tigers may be living illegally in captivity in the United States.

Most countries where tigers live in the wild have laws protecting them, but they are often poorly enforced. Tigers are on Appendix I of CITES but of the fourteen countries,which include China, India, Thailand, South Korea, Vietnam, Russia and Japan five have yet to join CITES.  They areBhutan, Cambodia, Laos, Myanmar, and North Korea. However, these five, together with the CITES members, have voluntarily pledged to stop international trade in tiger products and, within their countries, to ban the use of tiger bone in traditional medicine.

The countries where tigers can be found have formed the Global Tiger Forum to discuss ways of working together to help tiger populations recover. The countries party to CITES have also committed to ending legal as well as illegal tiger farming, as it has been found to stimulate the demand for tiger parts. Hopefully, the Global Tiger Forum's discussions will bring about effective enforcement. Conservation organisations have set up projects to try and control poaching and to win the support of people who live in  areas where tigers live, and to persuade people to use alternatives to traditional tiger-based medicines. The Wildlife Protection Society of India is working to dissuade gangs of poachers by offering rewards for any information leading to an arrest.