The word tsunami (pronounced soo-NAH-mee) is Japanese, and it means ‘harbour wave’.

Tsunami - What is it?

A tsunami is a huge volume of moving seawater.  These giant waves can travel for thousands of miles across the sea and still have enough energy and force to destroy buildings, trees, wildlife and people.

If you throw a stone in a pond it will create a series of ripples.  A tsunami is just like those ripples but the disturbance that sets them moving is much greater than a small stone.  It can be triggered by an undersea earthquake, landslide or volcanic eruption.

In deep water tsunami waves can extend thousands of feet into the sea, and reach speeds of 500mph, almost fast enough to keep up with a jet airplane.  There can be up to a hundred miles between each wave, which may be just a few feet above the sea.

Most Tsunamis are caused by undersea earthquakes.  These underwater earthquakes cause disruption to the seafloor and, in turn, the overlying water.  A tsunami and has nothing to do with tides although it is sometimes mistakenly called a tidal wave.

How and where do these undersea earthquakes occur?

The earth is made up of several pieces of hard rock that fit together a bit like a jigsaw.  These are called tectonic plates and they move very slowly.  Oceanic plates are denser/heavier than continental plates and so they slide under the continental plates.  Where this happens it is called a subduction zone.  There are subduction zones off Chile, Nicaragua, Mexico and Indonesia.  These areas are prone to earthquakes, which happen when the plates suddenly move against each other.

What other things could create a tsunami?

Sometimes when an ocean island collapses it causes a huge displacement of water which can also create a tsunami.  Very rarely, a tsunami can be created by a giant meteor hitting the sea!

Scientists found traces of a huge meteor rock that collided with the Earth 3.5 billion years ago and landed in the sea, which may have created a giant tsunami that drastically changed coastlines and wiped out almost all life on land.

On Friday 11 March 2011 an underwater earthquake triggered a tsunami which hit Japan’s north-east coast.  The earthquake was the most powerful ever recorded in Japan causing a 10 metre tsunami wave to hit the city of Sendai and further devastate several coastal communities.

On 26th December 2004 a devastating tsunami hit Indonesia and affected several countries.  The tsunami was caused by an underwater earthquake which measured 9.15 on the Richter scale.  Amongst the affected countries was Somalia in Africa which is almost 3000 miles from the epicenter of the earthquake.

The initial tsunami waves took a little over 2 hours to reach the teardrop-shaped island of Sri Lanka.  Additional waves continued to arrive for many hours afterward. 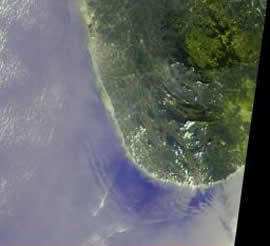 The 10 most powerful recorded earthquakes