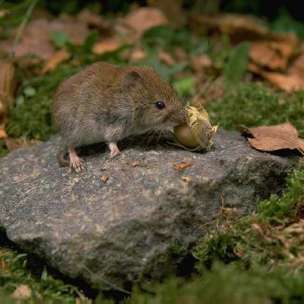 Distribution: widespread throughout Britain and offshore islands, but none in Ireland. Also found in northern Europe from north-west Spain to Russia.

Life-span: about one year.

Field voles, active by day and night, are aggressive and each one has its own small territory which it fiercely defends from other voles. They fight noisily, uttering loud squeaks and angry chattering noises. Each vole makes runways among the grass stems, usually centered on a tussock where it nests.

A favourite habitat is a young foresty plantation where there is lush, undisturbed grass. But after a few years, the trees have grown so much that they cast a dense shade and the grass dies, forcing the voles to go somewhere else. Some manage to live on the grassy fringes, from where they can quickly recolonise grassy areas that begin to grow once more trees are felled.

The field vole's breeding season is mainly March to September, although they may continue breeding into December. During the breeding season, male field voles produce a musky and unpleasant smell. They will defend their territories fiercely, squeaking loudly and fighting, often to the death. Four to six young are born in a nest of dry grass, usually hidden in a thick grassy tussock. The babies have grown their fur by ten days old and are weaned at around sixteen days. Young females are ready to mate at six weeks old.

Field voles are one of the most numerous British mammals and because they are prolific breeders, populations in a favourable habitat often increase to number in their thousands - a vole plague. When this happens, competition for space and food and heightened aggression leads to less successful breeding, with the result that the population rapidly declines. The fluctuations in populations usually occur in 3 -5 year cycles. Some predator populations also increase as the vole populations increase. For example, field voles are the main food of barn owls, forming 90 percent of their diet. A shortage of voles has an effect on the number of young barn owls reared.

Other predators include foxes, stoats, weasels, kestrels and snakes.

Although field voles are very numerous, they are not normally considered to be a pest. However, when they reach plague proportions, in some areas they can become serious agricultural pests, damaging crops.