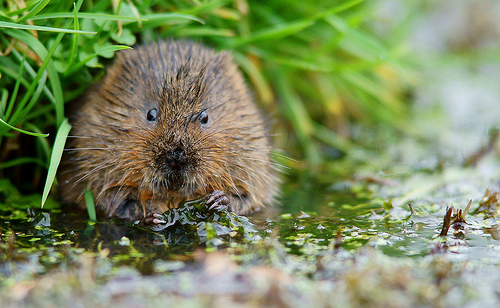 A male water vole occupies an area of waterbank of about 130m and will usually live in this narrow strip of land at the water's edge for a long time, sometimes all its life. A female has about half the range of a male and will sometimes leave her territory to live elsewhere. The voles leave small piles of droppings to mark the edge of their territories. Secretions from flank glands are also used to mark territories, particularly by the male. If overcrowding becomes a problem, males, and sometimes females, will fight, with loud high-pitched squeaks. Large social colonies are not usually formed and when numbers are high, after a good breeding season, some voles will leave the overcrowded area and look for somewhere else to live. During times of peak population, more than 100 water voles may live in one hectare of land (area of two football pitches).

The vole excavates a system of burrows in a waterside bank and the entrances may be above or below water. Inside the burrow, it builds a ball-shaped nest of grass and other plant material. These nests may also be built under driftwood or on the water bank if there is thick vegetation there. It may also build a small platform of grass and twigs on tufts of weed where it will sunbathe.

The water vole does not always live at the water's edge. In central Europe, it lives rather like a mole, some distance from water, burrowing in woodland, meadows, crop fields and gardens.

It burrows just under the surface, pushing the dug-out soil upwards into little heaps.

The water vole is active by day and night, and spends most of its time eating. It moves through grasses, sedges, willow shoots and other waterside plants, grasping the stems in its forepaws, tearing at them and biting out the best parts. A trail of discarded fragments and stumps is left behind.

The water vole is, of course, a very good swimmer, paddling with all four legs, blunt nose held clear of the water. Its short dense undercoat, covered by the long outer fur, keeps the vole warm and dry.

Water voles have a few natural predators including herons, owls, pike, mink and otters. When chased underwater by an enemy, such as an otter, the vole kicks up a cloud of mud that acts like a smokescreen, giving the vole a chance to escape via one of its underwater burrow entrances. 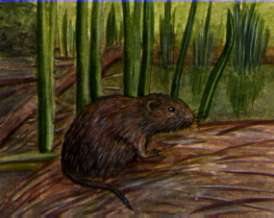 In Britain the water vole is regarded as inoffensive and harmless. Although the populations fluctuate widely, they rarely increase to a level where they do much damage - just occasionally their burrows undermine banks. In fact, it is thought that populations of water voles may be decreasing in Britain. This is probably due to the effects of habitat destruction and pollution of rivers and other water habitats.

Water voles are regarded as pests in continental Europe. “Plagues” of water voles sometimes occur and when this happens they eat so much vegetation that they reduce their environment to semi-desert, undermined by burrows and worn pathways. Crops are also attacked. Straight after this kind of event, the population drops dramatically, most likely due to a lack of food.

In Holland, water voles can be a serious threat to the tulip harvest as they eat the young bulbs in winter. In some areas, fruit trees may be attacked, the voles gnawing their roots so they wither and die.

In Russia, the water vole is hunted for its fur.

Water voles are often mistakenly called water rats, but they are only distantly related to rats. 'Ratty' from the famous book 'Wind in the Willows', should really have been called 'Voley'! Although it is the same size as a brown rat, the harmless water vole differs in having a chubby face with a blunt nose and short furry ears almost hidden by long fur. Brown rats do, like the voles, sometimes live in waterside burrows and may be seen swimming, but they are usually near buildings and often in polluted water. Water voles prefer clean water in less disturbed areas by lowland river banks or the edges of ponds and lakes.