Killer whales are the only whale to prey on other warm-blooded animals. Like wolves, they are pack hunters and will even attack a lame blue whale. 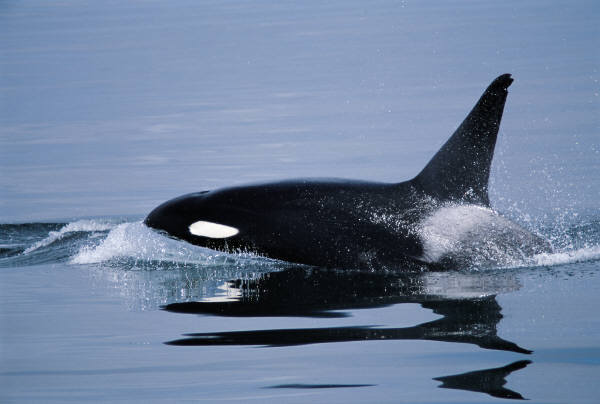 Distribution: in every ocean as far as the ice packs of the Arctic and Antarctic

Food: fish, squid and less often, seals and other whales.

The name 'killer' that we humans give to these whales is perhaps deceptive. However, they are the only whale to prey on other warm-blooded animals. Like wolves, they are pack hunters and will even attack a lame blue whale. 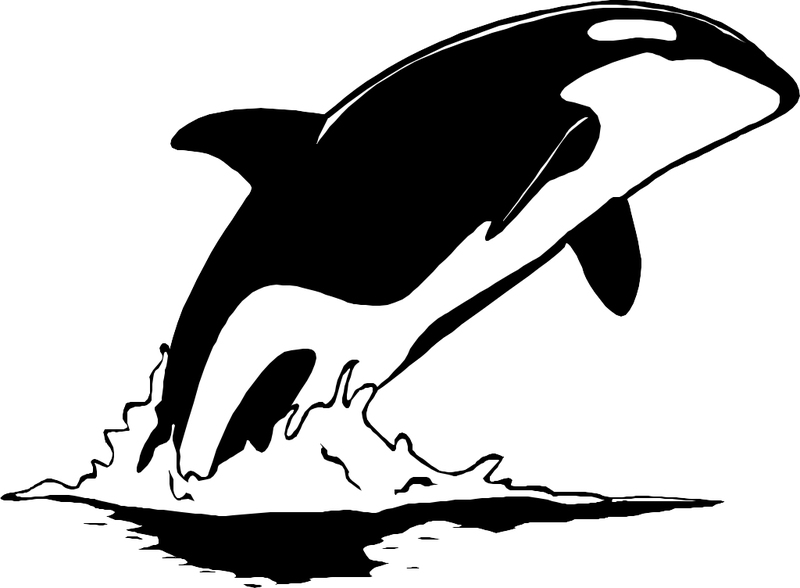 Orcas (killer whales) live in closely-knit family groups or pods of between 5 and 30 members. A typical small pod consists of an adult male with several adult females and their young. Larger pods may have several adult males. Females stay within their pods for life, but males move from pod to pod, often because the pod they are living with has become too large. Pods seldom spread out more than 1km when they are swimming together. Usually orcas stay close to the surface, although they can dive to 300m. They are very playful animals, and can often be observed racing along the surface of the water, or breaching, that is rising out of the water to land with a huge splash. It is thought that breaching could be a form of communication between pod members.

The male killer whale has a sword-like dorsal fin which stands 2m straight out of the water. The female's is shorter, and slopes backwards. The female can reach sexual maturity between 8 and 14, but males take longer to mature, taking on average about two years longer. It is likely that there is some sort of courtship, and single males probably breed with several females. Females give birth to a single calf after a gestation period of twelve months. Even at birth, the calf is 2m long, almost a third of the size of its mother! The calf stays with its mother for several years, and suckles for the first year of its life. The female is fully occupied with the new calf, and so may not breed again for 3-8 years.

Co-operation is the key to the killer whale's success in hunting. It is a highly intelligent animal, that makes its kills with the help of every member of its pod. All kills are shared between pod members.

Orcas use echolocation to find their prey. They send out a series of calls into the water. These will bounce off anything that blocks their path - such as a shoal of fish or a seal - and the whales are able to detect these 'echoes' and use them to find their prey. Once prey have been located, the orcas drive them from deep water towards the shore, as in shallow water it is much more difficult to escape.

Orcas also rise upright above the water to scan the area around them for prey. This technique is called 'scan-hopping' It is particularly useful for looking for larger prey on the surface. If a large whale is targeted, then the whole pod joins in the attack. Some try to seize the tail, which immobilises the prey, whilst others attack from all directions. In colder waters, orcas may tip small ice floes in order to catch any seals that may be basking on them. They are capable of tossing prey weighing up to 300kg into the air.

Killer whales are known for their distinct black and white markings but in April 2012 a completely white, adult male was spotted off the coast of eastern Russia.  Other white killer whales have been known but often don't grow to be very old - so to see an adult male is something quite peculiar.

In fact, this is thought to be the first ever sighting of an adult white killer whale.  Iceberg, as the whale has been named, is believed to be at least 16 years old as he has a fully developed 2 metre dorsal fin - that's taller than a lot of people!  The dorsal fin is the one that sticks out of the water and Iceberg's is a bit ragged so he may be even older.  Killer whales have been known to live up to 50 or 60 years but 30 years is most common.

This unique killer whale highlights the great biodiversity of this volcanic area of Russia which is home to many species of dolphins, seals, sea lions, birds and whales.  The American scientist, Erich Hoyt, who helps lead a research project studying the animals in the area said that Iceberg was "one of the most beautiful orcas anyone has ever seen".

White killer whales that have been born in captivity have been born with a genetic condition which causes the distinct change in markings, but also brings with it a lot of medical complications which is why they often die young.  This sighting has excited scientists and researchers who are hoping to learn more about this special individual and determine how and why he might be different.

The orca swims the fastest of all the members of the dolphin family. It can reach speeds of up to 50km/h, although for normal swimming, it moves at 10-15km/h.

It is possible to get quite close to killer whales in boats, as they seem to have no fear of them.

An orca's jaws can open so wide that a small seal can be swallowed whole.

Orcas have 40 to 50 sharp teeth, which point towards the back of the throat. These enable it to tear big chunks from larger prey.