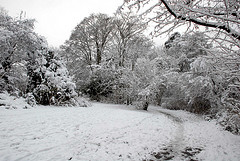 Even though our British winter is not nearly so cold and severe as polar winters, plants and animals still have to be able to adapt to low temperatures and a shortage of food. The cold causes living things all sorts of problems. Freezing temperatures turn water into ice so that animals cannot drink, and plants cannot take up water through their roots to enable them to make food (the process known as photosynthesis).

Some animals, particularly insectivores such as hedgehogs and some birds, cannot find enough food during the winter months. Autumn is the time when wildlife prepares itself for the cold weather ahead.

Here are a few ways in which plants and animals manage to survive the British winter...