In 2020, our population is nearing 8 million and is increasing by the second!

In Europe and the Mediterranean region we have some 145 indigenous breeds of cattle, no fewer than 115 of which are threatened with extinction, yet, as with plants, many traditional strains are of great value for breeding purposes. In Wensleydale, the now rare Wensleydale sheep has been used for crossing to produce a heat tolerant breed of sheep able to produce good quality wool in subtropical areas. The Cornish hen, once only maintained as a curiosity is now the basis of our broiler industry.

Researchers today are looking more and more towards animals to try and solve human problems. For example, in their search for a more effective crash helmet, they have turned to the woodpecker - how is it that it can hit a tree repeatedly with its beak at 1300mph without damaging itself, but at relatively low speeds people in motor cycle accidents often suffer fatal head injuries?

One of the world's most distressing diseases is leprosy. To date, research has been difficult because we have been unable to culture the disease, but it has now been discovered that the 9-banded armadillo from South America may hold the key because it too can contract the disease. 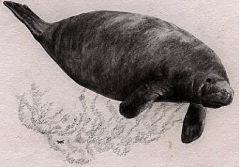 Manatees and Dugongs are on the list of endangered species - they have poorly clotting blood which may prove useful in the research into haemophilia. The black bear and other animals which hibernate possess hormonal mechanisms which enable them to sleep for five months during the winter. This type of metabolism may well supply information on the development of low protein, low fluid diets that may be of great importance to humans suffering from kidney failure. Many pharmaceutical industries rely for their raw materials on wild material. Pharmaceutical industries have recently been established in Asia, Africa and Latin America. More than 40 of the 90 species of plant used in modern medicine in these countries are available only from the wild and a further 20, though cultivated, are also taken from the wild. To preserve these pharmaceutical industries the plants on which they depend also need to be conserved.

We have looked at the way in which the researcher is turning more and more to the natural world to solve our problems. Hunger too is a problem that affects almost two thirds of the world's population. Yet those of us in the West apparently living in lands of plenty should not be too complacent. Of the many thousands of plants available only about 30 form most of the world's staple diets and within those 30 species the genetic base is often very narrow. 75% of the crop grown on the Canadian Prairies is devoted to a single variety of wheat. The U.S. soya bean industry is derived from a mere 6 plants.

The loss of any species, however insignificant, is a loss to science and mankind as we cannot be sure whether or not that species may prove to be valuable in the future. Therefore, there are good economic reasons for conserving populations of species, ie. Biodiversity.