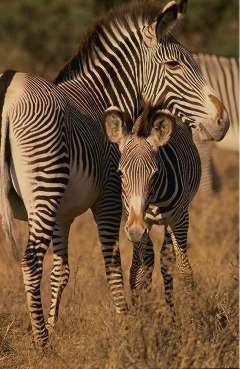 These rare zebras are dependent on humans, for now and although feeding the wildlife is generally discouraged - it may be the only way to help the endangered Grevy’s zebra survive drought.

Two subspecies of mountain zebra are recognized, living in southern Africa. These are Hartmann's zebra (Equus zebra hartmannae) and the Cape mountain zebra (Equus zebra zebra) which faced extinction as numbers declined drastically to less than 60 individuals at the beginning of the 20th century. However, due to conservation efforts, an estimated 4,872 of these zebras in 76 sub-populations throughout South Africa was recorded in 2015. Their population grows an estimated 9% each year.