Another Crisis At Fukushima

I have been watching developments at the Fukushima nuclear plant in Japan with increasing horror, but not much surprise over the last couple of weeks. Radioactive water had been discovered leaking from at least one of the water storage tanks that are gradually increasing in number around the reactor. The water is used to cool the fuel rods in the reactor, at a rate of 400 tonnes per day. Once it has come into contact with the fuel rods, it is highly radioactive and needs to be stored for processing to remove some of the more dangerous elements. So more and more water storage tanks are being built and there are now around 1,000 on the site. 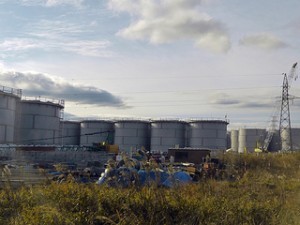 The tanks have been built in a hurry from steel plates held together by bolts with plastic seals between the joints. It’s these seals which are now failing and causing the leaks.

Up until this weekend, it was thought that the leaking water was emitting radiation at a rate of 100 millisieverts an hour – meaning that just an hour spent near that water would give anyone exposure to twice the annual dosage of radiation permitted for workers in the nuclear industry in Japan.

That seemed bad enough, but now it turns out it’s actually a lot worse. It seems the testing equipment used a couple of weeks ago, was only capable of reading a maximum of 100 millisieverts an hour! Testing with new equipment , able to give readings of up to 10,000 millisieverts an hour has shown that the actual radiation levels are 1,800 millisieverts an hour, eighteen times higher than previously thought. Exposure to this level of radiation for just four hours could be fatal, which could have profound implications for those who have been working at the plant for the last few weeks.

This mess isn’t getting any better. Remember, it was 11 March 2011 when the plant was hit by the tsunami that resulted in fuel rod melt-downs in three of its reactors. In the immediate aftermath, some 160,000 people were evacuated and many still haven’t been able to go home. Now it seems that the Japanese government is going to intervene, providing assistance to the beleaguered Tokyo Electric Power Company (Tepco) and international experts have been called in to provide their assistance.

A real sense of mistrust has built up in Japan over the way that Tepco and the government have handled this crisis. There has been too much misinformation, too much playing down of the problems.

And all this couldn’t have come at a worse time. We desperately need as a species to find ways of generating electricity without releasing more carbon dioxide into the atmosphere. Nuclear power generation is carbon-free, so could be a part of the solution. But the crisis in Fukushima illustrates only too clearly what can happen when things go wrong.