Around the world in 585 days

The World’s largest solar boat has recently docked in London. The MS Tûranor Planetsolar is 35 metres long, is up to 24 metres wide when its solar panels are fully extended and weighs in at 100 tonnes. It can hold a crew of up to nine people and is powered by twin 60kW electric engines, which are capable of propelling the vessel to speeds of up to 14 knots (26 kmh, 16 mph). With its panels fully extended, it has 512 square metres of solar panels, which are capable of generating 1,000 Watts per square metre. 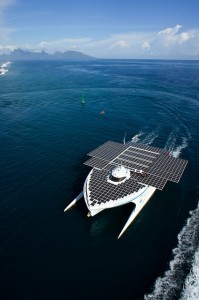 Planetsolar is a catamaran and in each hull, there are 4.5 tonnes of batteries, which can store sufficient energy to keep the boat powered for up to 72 hours without charging.  It’s not going to be breaking any speed records – 45 days is the record for circumnavigating the world by boat – and of course, travelling by water with zero carbon emissions is nothing new – sails have achieved this pretty well for centuries!

But with shipping accounting for 2.7% of the planet’s total carbon emissions (air travel creates less than 2%) and with emissions from shipping potentially doubling by 2050, finding cleaner propulsion methods for cargo ships is an urgent priority.  Other options being considered include technologically advanced automatic sails that work like rollerblinds, eliminating the need for rigging and biogas engines.

The Planetsolar is important because it proves solar power can work and it’s viable.  Sailing the Planetsolar requires special skills on the part of the captain.  You need to plan well ahead, look at the weather reports and decide where you’ll get the most sunshine balanced against the least resistance from the tides.  And Captain Gerard d’Aboville says they have never run out of power yet.

Planetsolar has been the platform for a study of the Gulf Stream, which was carried out by a team from the University of Geneva.  To be able to spend several months in deep water and enabling air samples to be taken without contamination from the boat’s exhaust fumes made Planetsolar uniquely suited for this purpose.  The data collected by the team suggests that the world’s oceans play a greater role than was previously thought in climate change.

After docking in London this week, Planetsolar is heading for Paris, then back across the Atlantic to Rio, where it will be studying the impact of Saharan dust on the Atlantic Ocean.

This is an amazing piece of technology.  It shows what we can achieve and should serve as an inspiration for us all to look for cleaner ways of travelling and of living our lives.  This is just one boat, but it has proven that it works and it looks fabulous too.  I hope there will be many more to come.