Aardvark means 'earth-pig' in Afrikaans. They are very secretive animals so very little is known about their way of life. 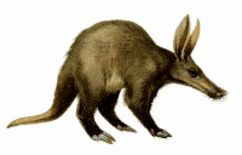 Distribution: Africa, south of the Sahara.

Life-span: Up to 10 years in captivity, unknown in wild.

Aardvark means 'earth-pig' in Afrikaans. They are very secretive animals so very little is known about their way of life. They are active by night, and have been shown by the use of radio collars to travel up to 30km in a night. They live alone, except for females with young, in burrows 3-4 metres long, with a sleeping chamber at the far end which is large enough to allow them to turn around easily.

They are clean animals, and small pits are dug around the burrow for their droppings. When full, these are covered over with earth. Each animal will have several burrows, some of which are just shelters from bad weather, or bolt-holes to protect them from predators. Larger sites are used for breeding, and these may have a number of large chambers which can be up to 13 metres long and can be reached via several entrances.

Little is known about the aardvark's breeding habits because of its secretive lifestyle. We do know though that their gestation lasts for seven months, and that the young are born just before or during the rainy season, when food is most plentiful. At birth, young aardvarks weigh about 2kg, and after about two weeks, they are able to go with their mothers on foraging trips. They remain with their mother for about six months, by which time young aardvarks are capable of digging their own burrows, though they may still remain with their mothers for a little while longer.

Aardvarks forage for food only at night and mostly find their food underground. They have bad eyesight, but have excellent senses of smell and hearing, which they use to help find termite nests. They walk in zigzags, sniffing the ground and pointing their ears forwards. Once a nest has been located, aardvarks are ideally equipped for breaking in. They have long, spoon-shaped claws and powerful forelimbs ideally adapted to burrowing into termite mounds and can penetrate nests which could not be broken through by a man using a pickaxe. There are four claws on each front foot and five on each back foot.

When the nest has been broken into, the aardvark can probe the hole with its snout. The snout is long, and is protected from dust by a fringe of rough bristles. The nostrils close up when the aardvark is burrowing. Aardvarks have thin and sticky tongues up to 45cm long. They are ideal for feeding on ants or termites swarming through a hole in their nest.

The hole in the termite nest is gradually enlarged by the aardvark until it can get its whole body inside the nest, but it will not destroy it in a single visit, preferring to return several nights in a row to feed on the ants or termites. Ants are more plentiful during the wet season, whilst termites are more common in the dry season. However, if food supplies become scarce, aardvarks will sometimes eat fruit, such as the aardvark cucumber, and soft-bodied insects to supplement their diets.

A keystone species is a species which affects the survival and abundance of many other species in the community/habitat in which it lives. Aardvarks are considered a keystone species by many people as many mammals and insects use their abandoned burrows for protection and shelter from the sun, predators and to bring up their young.

Another reason that aardvarks are important to their habitat is because a plant known as the aardvark cucumber relies on the long nosed mammal to spread it's seeds.  The fruit grows underground and is a treat for any aardvark, but being underground it's very hard to spread it's seeds and germinate.  Aardvarks help the plant to survive and flourish by eating the fruit and spreading their seeds in their dung. 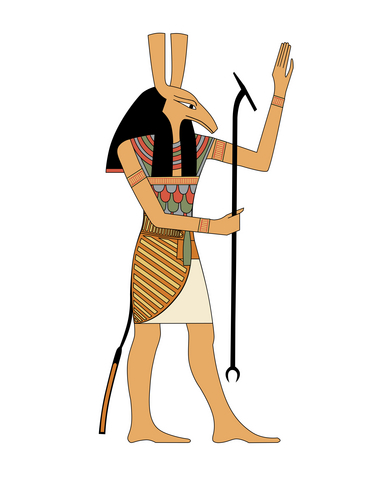 The Egyptian god Set, god of deserts, storms and chaos, is thought to have the head of an aardvark.  What do you think?

In African culture, the aardvark is considered very brave due to its willingness to hunt termites. Hausa magicians make charms from parts of the aardvark. These are said to allow the wearer to pass through walls in the night! Some other peoples, such as those of the Margbetu, Ayanda, and Logo tribes, wear bracelets made of aardvark teeth as good luck charms.

Threats to the aardvark

Among an aardvarks predators are humans (some humans eat aardvark meat) and lions, leopards, hyenas and pythons.  Aardvarks rely on a very specialised diet, and are threatened by changes in land usage, particularly where land is given over to crop farming. They are not in danger at present though, and termites, their main food, seem to be on the increase.