One of our three native snakes, the adder is the UK’s only venomous snake.  However, they are not aggressive and no one has died from an adder bite in the UK for at least 20 years. 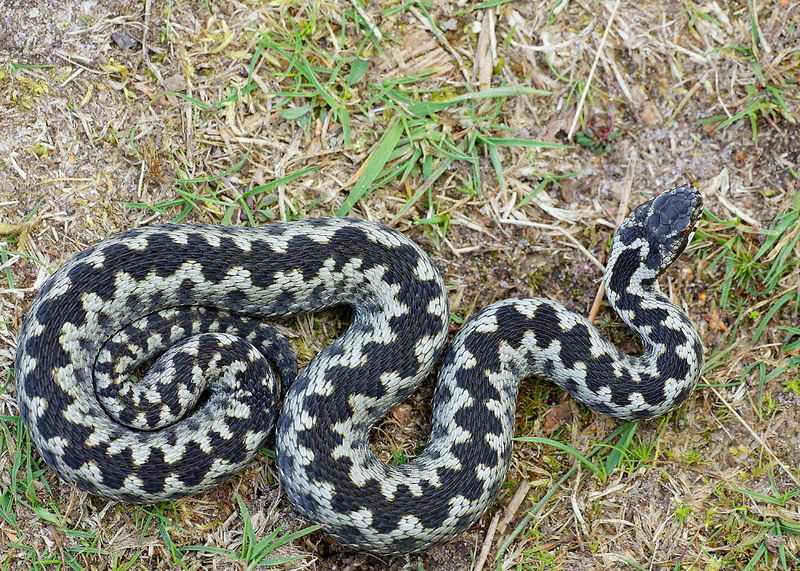 Distribution:  Found in woodland, heathland and moorland across UK, except Channel Islands, Scilly Islands, Northern Ireland, Scottish islands and Isle of Man.  Widespread across Europe from Scandinavia and the Baltic to UK and France, then eastwards to Russia, Mongolia, Democratic People's Republic of Korea and northwestern China.

Habitat:  Rough open countryside such as heathland and moorland and the edges of woodlands, where plenty of sunlight hits the ground.

Adders are the most commonly seen snakes in the UK, mostly because they are less likely to move into cover if disturbed.  They hibernate through the winter and emerge in early spring.

Like other reptiles, adders are ectothermic, meaning that they cannot generate their own body heat.  As a result, they need to raise their body temperature to 25℃ to 30℃ before they can become fully active and will bask in patches of sunlight to raise their temperature.  Pregnant females bask in the sun to aid the development of their young inside their bodies. In the UK, it is often May before daytime temperatures are high enough for adders to being hunting for food. 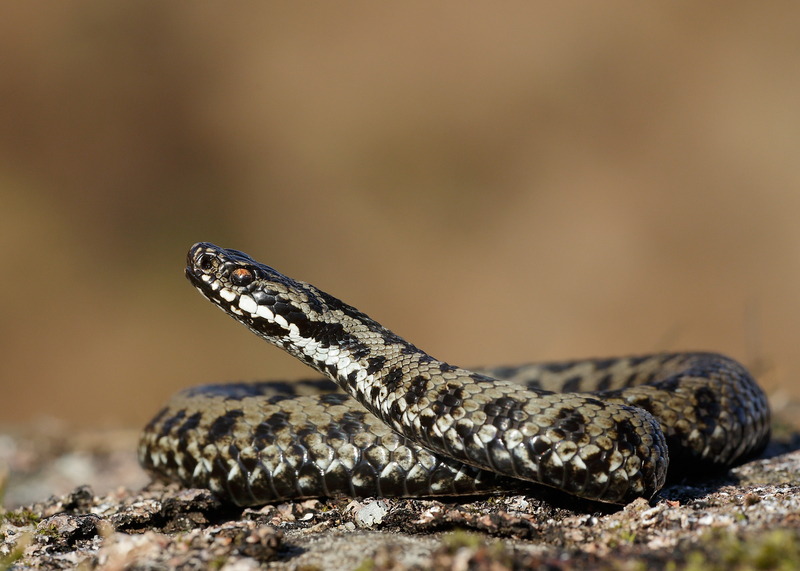 Adders are secretive and non-aggressive.  They never set out looking for humans to bite, so if you leave them alone, they will do the same for you.  They have a highly developed venom injecting mechanism, but will only bite as a last resort. You are very unlikely to be bitten unless you either tread on an adder by mistake or attempt to handle them.  Even if bitten, with proper treatment, the worst effects tend to be bruising and nausea, with just ten human deaths from adder bites recorded in the UK in the last 100 years.  That said, adder bites are very painful and recovery can take up to a year!  Medical assistance should always be sought in the event of a bite. 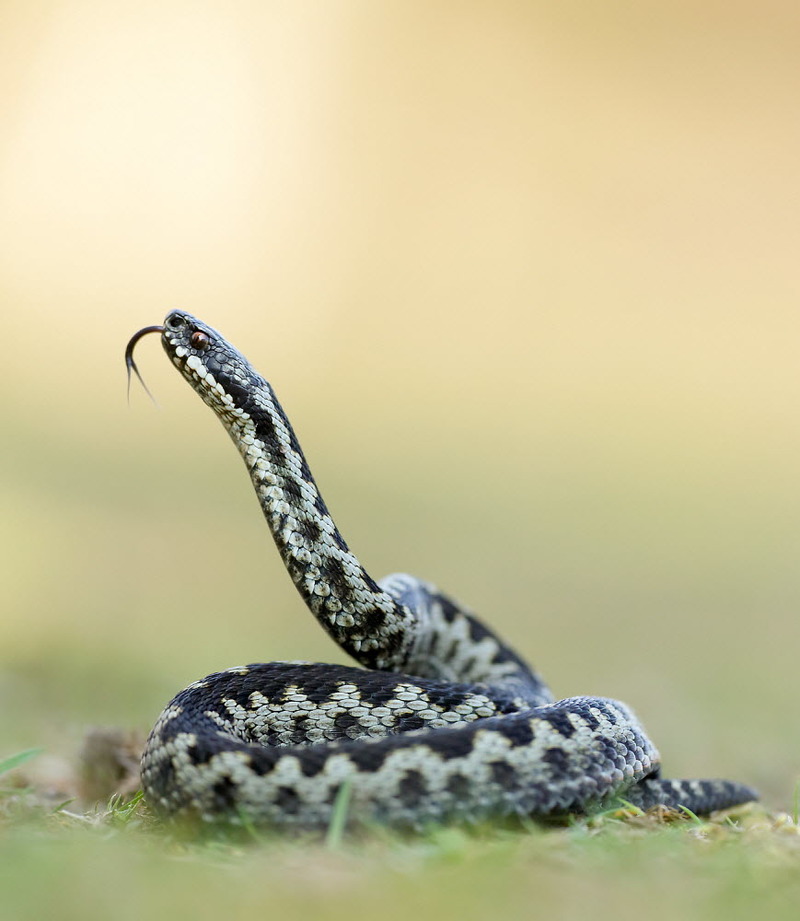 Threats to the adder

Young adders and even occasionally adult snakes are vulnerable to being eaten by birds like crows and buzzards.  They can also be eaten whilst in hibernation by rodents. Adders are protected by law in the UK against being killed,  injured or traded by humans.

In October 2016, Amphibian and Reptile Conservation (ARC) led "Vanishing Vipers", the first ever national conference dedicated only to adders. This provided information to people about how to protect adder hibernation sites and to give tips on managing adder habitats.

All photos by Iain Leach, courtesy of Wildscreen Exchange unless otherwise labelled.

The adder is a small snake that grows to a maximum length of around 60cm.

The adder's head is quite large and flat with large, red eyes. There is usually a darker V or X shaped marking on the back of the head.  The adder has a distinctive dark zig-zag pattern down its back.  Unusually for a snake, it is possible to tell the sexes apart based on their colour. Females are light to reddish brown with dark brown markings, while males are greyish in colour with black markings.  Occasionally, adders are melanistic (entirely black). 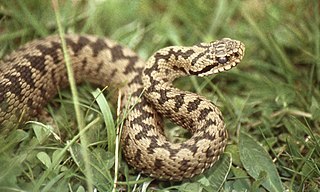 The adder's main prey consists of small mammals such as rats, mice, voles and shrews.  They will sometimes also eat larger mammals such as moles. Occasionally they will hunt for lizards or amphibians and they have been known to catch slow worms.

Adder's have been known to climb into shrubs and bushes to raid nests for their eggs or for young birds.

When hunting, adders strike swiftly, delivering a venom-injecting bite to their prey.   Then they wait for the prey to die before swallowing it whole. They are able to extend their jaws to swallow prey much bigger than their heads, whilst their ribs are not joined and can also open outwards to accommodate much larger prey.  Their digestive juices are very powerful, so only the teeth and hair of a rodent pass through the snake.

Adders mate in the late spring to early summer. The males locate the females by following their scent and will travel for hundreds of metres a day to find a mate.  If a rival male appears on the scene, the first adder to arrive will fight it. The males raise the upper part of their body into the air and carry out an 'adder dance', moving around each other in a threatening display and trying to push each other to the ground. There is no record of adders biting each other during these battles. The defeated male leaves in search of a new mate.

The male and female stay together for a few days after mating and the female gives birth to a litter 3 to 4 months later. there can be from 3 to 20 young in a litter and each young snake is born in a thin transparent sac from which they have to free themselves. Occasionally the young will manage to break out of the sac while still inside the pregnant snake.

Young adders shed their skin for the first time after a couple of days and stay near their mother at first. They are born ready to bite and inject venom and start hunting right away, eating smaller prey such as worms and spiders until they are big enough to hunt larger creatures.