Distribution: The southern oceans and its small islands. Between Antarctica and the Tropic of Capricorn.

The wandering albatross has the largest wingspan of any bird and is perhaps the most magnificent of all twelve species of albatross. It is aptly named as it is a great traveller, covering enormous distances, gliding effortlessly on updraughts. It sometimes spends several months in the air, without ever touching land. 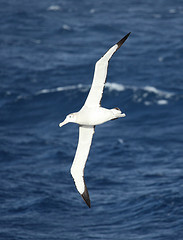 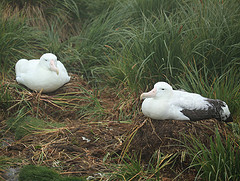 The Wandering Albatross and Humans

One of the biggest threats to the wandering albatross is 'long line' fishing.  Longline fishing is a method used to catch more expensive kinds of tuna.  This method involves putting out fishing lines up to 100km long from which there are as many as one thousand shorter lines attached with baited hooks.  This still indiscriminately kills untargetted marine life such as turtles (of which 6 out of 7 species are considered threatened) which are tempted by the jelly fish appearance of the bait.  Abatrosses and other seabirds can also get caught on the hooks.  According to a study in 2011, 300,000 albatrosses are killed yearly by long line fishing. 1  For information see our factsheet Over Fishing.

Another threat to the future of the albatross is plastic, oil and chemical pollution of the sea.  There may be more competition for food too if fishing increases in the southern oceans.

Sailors gave the albatross its name. The name is taken from a Portuguese word "alcatraz" originally meaning any large seabird. Over the years many less complimentary names have been given to albatrosses, all of them suggesting stupidity. These names include "mollymawk", (from the dutch word meaning "stupid gull") and "gooney"(derived from the old English "gooney"used to describe a stupid person).

This reputation for stupidity probably resulted from the fact that the albatross is very clumsy on land. It waddles awkwardly, often tripping over its own feet! Landing can be difficult too; quite often a bird crash lands into the breeding colony, sometimes turning several somersaults!

Sailors also used to regard the albatross as a harbinger of wind and storms, possibly because it has difficulty in flying during very calm weather. They also thought an albatross was a reincarnation of a sailor washed overboard and it was thought very unlucky to kill one.  See the poem 'The Rime of the Ancient Mariner' by Samuel Taylor Coleridge about a story of the sailor who killed an albatross.

During the latter part of the nineteenth century however, most species of albatross were sought after for the fashion trade, and thousands were killed for their feathers. These were used by the millinery trade for decorating hats - sometimes whole wings were used for this purpose. The feathers were also used for stuffing mattresses and pillows, though it was called "swans' down" at the time. Fortunately, the fashion for wearing birds' feathers died out before the albatrosses became too seriously threatened. In 2020, the ACAP launched World Albatross Day as an opportunity to spread the message of conservation to the wider public.

1. BBC News 'Seabirds such as albatrosses killed by longline fishing' by Victoria Gill