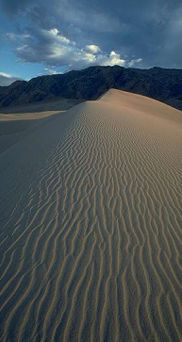 It has been said that forests came before human beings, deserts followed them. Desertification is becoming a major problem as more and more of the world's land surface is turned into desert.

Desertification is a process of soil erosion and land degradation. Deserts are typically areas covered in sand but desertification extends to mean any areas where land can no longer sustain plant and animal life.

Soil is made up of millions of active, living microrganisms and bacteria. The process of decomposition and the production of humus gives life to plants and animals which in turn provides food for other plants and animals - including humans.

When a land's soil is no longer fertile enough to allow plants to grow the land is effectively dead - it becomes dry, dusty and arid.

Climate variations, where areas are consistently hot and dry, with long periods of no rain can soon cause soil conditions to deteriorate.  Lack of rainfall leads to drought, and eventually the necessary growing conditions for plants and animals disappear.  Most plants, unless specially adapted to desert conditions, can not thrive in dry, arid conditions.

Farming is major cause of desertification - soils need time to rest between crops but pressures to provide food and an income often lead to soil and land being over used and becoming tired. Soil also requires fertilisation to remain fertile, preferably through natural or organic processes.  Where farming is carried out in a way that is unsympathetic to the land in places where climatic conditions mean the soil is already under stress, this can eventually result in desertification.

Read More: How Big a Problem is Desertification?