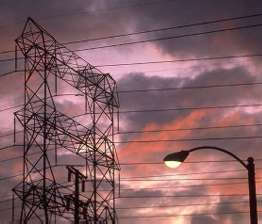 Electrical energy is natural and can be seen as strikes of lightning during thunder storms.  Humans have been fascinated with electricity for hundreds of years, and have slowly gained more and more understanding of this bright and powerful energy.

History
The first power station in UK began generating electricity for mass consumption in London, in 1882.  This invention accelerated the Industrial Revolution and the powered-up way we live today.

How is this electricity generated?
Small amounts of electrical energy can be generated by spinning a magnet within a coil of wire.  But to generate enough electricity for a whole city giant machines called ‘generators’ at power stations need to be used.  Over the years we have found many different ways to ‘fuel’ these generators.

In many power stations, non-renewable fossil fuels such as oil, coal and gas are burnt to create heat.  Others burn recently living organisms - known as biomass.  Some use heat that occurs on its own underground, this is called geothermal energy.  Let’s look at the processes which turn these fuels into electricity!

Wind, tidal and hydro-electric power supplies also have generators and spinning blades but they do not require heat to turn the turbines.  Can you guess how each of them turn their turbines?

Here is a list of fuels used for their chemical energies to produce electricity, some are renewable, some aren’t-

Fossil fuels are so-called because they formed underground over millions and millions of years.  Because these fuels take so long to form, once we use up all the fossil fuels we won’t be able to replace them!  That is why they are known as non-renewable.  The amount of these fuels that we use has increased dramatically across the world and sooner or later they will run out.  This is why renewable energy is a big part of the planet’s future.