The sea otter is an almost exclusively marine animal, spending little time ashore. Its fur is thick and glossy and ranges in colour from black to dark brown, with some white tipped hairs. 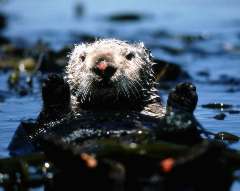 Gestation: 8-9 months. Sexually mature at 3 years, mating can take place all year round.

The sea otter is an almost exclusively marine animal, spending little time ashore. Its fur is thick and glossy and ranges in colour from black to dark brown, with some white tipped hairs. The large, blunt head, throat and chest are all creamy white. Its ears are almost hidden in its fur and its eyes are small. Sea otters are propelled through the water using their long, well-defined flipper-like hind feet. The forelegs are comparatively small, with five-fingered forepaws, which are used to grasp shell fish and other prey.

The sea otter is the only carnivore to have four incisor teeth in its lower jaw. These are used to break open the shells of crabs, sea urchins and other shellfish.

It is also unusual in that it has no layer of fat or blubber under the skin. Instead, air trapped inside the thick fur provides insulation and prevents excessive heat loss. Up to 10% of a sea otter's life is occupied with the cleaning and grooming of its fur. If the fur is damaged or polluted with oil, it loses its effectiveness, so the sea otter may die from cold and exposure.

Their luxurious coats brought sea otters to the brink of extinction. Killer whales and sharks are their natural predators, but humans have proved to be by far their biggest enemies. In the 18th century they were mercilessly exploited by European fur hunters until only a few were left.

Sea otters rarely venture more than one mile off shore. Instead they live in small herds in shallow waters, particularly around kelp beds, great forests of seaweed, rich in shellfish, fish and other marine life. They play an important role in the kelp beds, as they are the only mammals to eat sea urchins, which are voracious feeders on the kelp.

The kelp is also useful to sea otters when they sleep at sea, as they wrap it around themselves to prevent drifting. Some individual sea otters prefer to come ashore to sleep though, possibly as protection against killer whales.

They are active by day and feed, float, sleep and swim on their backs, only swimming belly-down when in a hurry or trying to evade predators. Feeding takes place mainly in the early morning and evening, with sea urchins, crabs, abalones and other shellfish being the main items on the menu, although fish and octopus are also eaten occasionally. Sea otters regularly dive to depths of 100 feet in search of food and stay under for 30-40 seconds, although they are capable of diving up to 300 feet, and of holding their breath for up to five minutes in an emergency.

When eating, the chest is used as a table. Large crabs are eaten piecemeal, one leg at a time, while the crab runs about on the sea otter's chest. The sea otter is one of a very small group of animals (such as the chimpanzee, orangutan, Galapagos woodpecker finch, Egyptian vulture and human) that use tools. A flat stone is often placed on the chest and used by the otter as an anvil on which the shells of mussels and other shellfish can be smashed by repeatedly dashing them against the stone using the forepaws. Sea otters have to eat one-quarter of their own body weight (up to 25lbs) per day in food to survive.

Stories are told of how sea otters nuzzled hunters who were about to club them to death, and of others who on seeing hunters' guns trained on them, turned their backs and covered their eyes with their forepaws. By the beginning of the last century, sea otters were so rare that pelts could fetch $1000 each.

Fortunately though, the American government passed a law in 1910 prohibiting the capture of sea otters in American waters. By 1911 other governments had also brought in legal protection for sea otters. By this time the sea otter population was down to about 1,000 worldwide. Now the population has risen to over 130,000, but sea otters still only occupy one-fifth of their original range, with colonies in California, western Alaska, and the Commander and Kurile Islands north of Japan. Sea otter population growth has stalled in recent years and there are only about 3,000 southern sea otters left in the wild today.

If it were not for government protection it almost certainly would have become extinct. Though with it's population still decreasing it is doubtful whether the sea otter will ever reoccupy its full range and it is still classified as endangered by the IUCN.

Mating takes place throughout the year after an elaborate courtship. Pregnancy lasts 8 or 9 months before the single pup is born well-formed, with its eyes open and a complete set of milk teeth. Although the birth takes place ashore, the mother immediately carries the pup into the water and from then on gives it constant attention, nursing and grooming it on her chest as she swims on her back. Pups do not leave their mother until they are about a year old, and do not breed until they are three years old. Females can bear pups only every other year, so sea otters are slow breeders.

A sea otter herd can make for noisy neighbours, as all sea otters are quite vocal. Pups cry when they are hungry, females coo affectionately to their pups and their mates and adults of both sexes scream when in distress. Companionship is expressed by a loud squeal which sounds rather like a whistle.