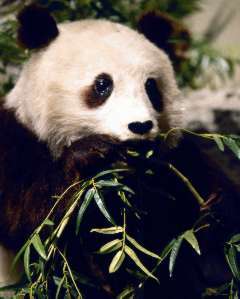 Life Span: Up to 20 years in captivity. Unknown in the wild.

The giant panda was unknown to the western world until 1869, when it was discovered by a French missionary called Pere Armand David. For a while, it was known as Pere David's bear.  A complex process of DNA testing has now shown that giant pandas are indeed bears, and not members of the raccoon family, as was thought until recently.

Giant pandas are extremely rare. They number less than 2,500 in the wild. The hunting of pandas has been banned for many years, so this is not the problem. Destruction of its habitat, when areas are cleared for crop cultivation, is one of the main reasons for the panda's decline. Another reason is that the bamboo on which they mainly feed, is dying back. The pandas find it difficult to migrate to new feeding areas because they find themselves hemmed in by human settlements. As the bamboo disappears, the pandas simply starve to death.

Some would argue that in evolutionary terms the panda isn't well equipped for survival - regardless of the human impact on populations.

Bamboo is a poor source of food, and pandas have to eat up to 45kg of it every day, a process that takes them up to 16 hours. The process goes on day and night, with the pandas in a constant cycle of eating for eight hours and sleeping for four. The panda's digestive system is poorly adapted to its diet of bamboo, so they only digest the equivalent of one hour's worth of food every day. The rest of the nutrients are lost. Pandas are essentially carnivores but are too slow to catch most live prey. They can eat other foods, but will rather starve than change their diet when bamboo becomes scarce, so it could be said that they are contributing to their own destruction.

Their breeding and reproduction cycle could also be at their disadvantage as females are only fertile for 1-3 days a year.

Pandas have very strong jaws and the largest molar teeth of any mammal. They use these teeth to crush tough bamboo stems. They also have lengthened bones in their wrists, and the forepaws have an extra 'thumb' which enables them to grasp even small bamboo shoots with great precision.

Giant pandas are very good climbers, and use this skill to escape from predators. They are flat-footed and ungainly when on the ground, but are able to move almost silently and very quickly through networks of tunnels in the bamboo.

The giant panda lives alone for most of its life, only coming together with another of its species for long enough to mate. A newborn panda cub is born hairless and blind, is about 15cm long and weighs only 100g. The cub will stay with its mother for about 18 months, until it is able to establish its own territory. Pandas use a scent gland beneath their tails to mark their territories, using their tails as brushes.

Chinese and American scientists are studying giant pandas and their habits in order to put in place a major conservation programme. A process to make bamboo flower early may well have a huge bearing on the panda's chances. Zoos around the world are participating in panda breeding programmes. There is still hope that with human help, the giant panda can survive in the wild.