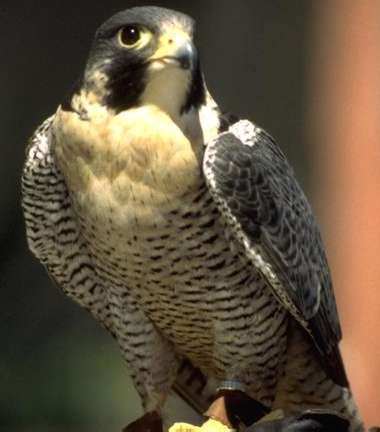 Lifespan: Up to15 years in the wild, but high mortality rates among juveniles (young birds) makes the average lifespan 6 years.  Up to 25 years in captivity.

Food: birds up to the size of a pigeon. Some small mammals.

Territory: The peregrine falcon prefers open country such as moorland, prairie and semi-desert. In Britain it is most common on upland moors in Scotland and the Lake District, and on coastal cliffs. A bird's territory can be up to 200sq km.

Peregrine falcons pair for life and usually build their eyrie (nest) on a high, inaccessible cliff or crag. They return to the same eyrie each year. The nest itself is usually just a simple scrape and the ledge wide enough to take up to four young.

The peregrines' courtship involves some impressive aerial acrobatics. The tiercel (the male, so-called because it is a tierce; one third, smaller in size than the female) 'loops the loop' after making a mock dive at the female. He also passes food to the female, often while in flight. To allow him to pass a 'gift bird' in mid-air, the female rolls over while flying to take the food from his talons.

Three or four whitish eggs with reddish-brown blotches are laid in about April. The female does most of the incubating until the eggs hatch a month later. The chicks are covered in fluffy down at first and begin to grow their adult feathers at about a month old. The chicks can fly at 5 - 6 weeks old. The parents may travel far and wide to find food for their young.

For many years, gamekeepers persecuted peregrines because of their liking for grouse, and their eggs have been prized by collectors. During the Second World War people were encouraged to shoot peregrines in case they caught homing pigeons which were carrying messages. However, it was the introduction of the deadly organochlorine pesticides, such as DDT, in the 1950s, that caused the peregrine population to crash. The pesticides were sprayed on crops to kill insects etc. and instead of breaking down in the environment, they accumulated in the food chain. Peregrines are predators at the top of the food chain and their body tissues accumulated such large quantities of the poisonous chemicals from their prey that their breeding success was affected. Their eggs were either infertile or had fragile shells which broke easily.

Many top predators, both bird and mammal, suffered from these poisonous chemicals, but fortunately they were finally banned in the mid 1970s, and since then the peregrine has been making a recovery. It is a specially protected bird under the Wildlife and Countryside Act and there are approximately 1,500 pairs in Britain. Where peregrines are nesting in places vulnerable to egg-collectors, they may be guarded by volunteers. Anyone caught trying to catch a peregrine or steal its eggs is liable to get quite a hefty fine.

Birds are the peregrine's favourite prey, ranging from small meadow pipits to larger birds such as red grouse and pigeons, although birds as big as a Brent goose may be tackled. In winter, estuary birds are often preyed on, such as ducks, gulls and waders. The falcon may also hunt rabbits and bats. Most victims are caught in the air; the peregrine circles high in the air, keeping a sharp eye out for prey. It can spot prey on the ground from a height of 300 metres. When a victim is spotted, the hunter suddenly snaps back its wings and plunges down in a dramatic 'stoop'. It can reach speeds of up to 180mph (290 km/h). If the attack is successful, a blow from the peregrine's sharp talons breaks the neck or back of the flying prey.

Birds on the ground and in hedges may be flushed out as the falcon flies over vegetation, and then they are pounced on. The catch is immediately taken to a plucking post such as a tree branch or rocky crag, and the feathers are pulled out. The whole carcass is eaten and any indigestible material is regurgitated in the form of pellets, usually near the peregrine's nest. A peregrine eats about 100g of food per day.