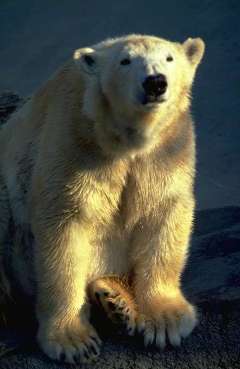 Polar bears are mostly solitary animals and are active at all times of year, always on the look-out for a meal. They are extremely strong and active and cover the ground quickly with long strides of their bowed legs. The soles of their feet are covered with hair to help them get a grip on slippery ground. Polar bears are also good swimmers using their front legs to propel them, their hind feet trailing behind. Keeping their eyes open and their nostrils closed, they dive beneath the surface and can stay under for up to two minutes at a time.

Some bears spend both summer and winter along the lower edge of the pack ice, sometimes migrating from north to south as this edge shifts. Others move onto the land in the summer and spread out across the ice as it forms along the coast and between the islands during the winter.

Any polar bear may make a winter den for temporary shelter during severe weather.  Pregnant females can stay in their dens for up to three months to give birth to their young.  They don't eat during this time, but live off their fat reserves.  Males and non-pregnant females remain active all year.

Fortunately, in 1973, an international agreement banned the hunting of the polar bear, only the native Inuits are allowed to kill them. Since the ban, the polar bear population steadily increased and the current population worldwide is now between 22,000 - 31,000.   It is an endangered animal and there are serious threats to the continued increase of the population; these are...

In summary, the most serious threats to the future of the polar bear are destruction of their habitat through oil and gas exploration and significantly through climate change, interference by tourists and pollution of the sea. If these causes are not restricted, the population of this great bear will continue to decline.

Scientists predict that if current trends continue, the polar bear population will shrink by two-thirds by the year 2050 and faces a high risk of extinction by the end of the 21st century.

The polar bear is carnivorous, eating mainly the ringed seal, although small land mammals, carcasses of marine mammals and reindeer, berries etc, also form part of the diet.  They are at the top of the food chain and are important at keeping the seal population in check as well as being vital for many other food web connections.

One of the mainstays of the polar bear's diet is the ringed seal which it stalks across the ice or ambushes at a breathing hole. The white-yellow coat of a bear acts as camouflage against the snow-coloured background. The seal is killed by a blow from the bear's powerful paw. The fat and skin is usually eaten first and the meat left until last.

During the late summer and early autumn polar bears will search for walrus and whale carcasses (carrion) along the coastal areas. Sometimes ten or twenty bears may be feeding at a carcass. There is more open land at this time of year and the diet is more varied, including lemmings, Arctic foxes, ducks and their eggs. Polar bears, like most bears, will also feed on berries, toadstools, mosses, lichens, grasses, seaweeds etc.

Polar bears mate in the spring, particularly in April. During this time, the males wander over long distances, looking for females without cubs. Most females breed every three years when their young have left.

The female bear digs out her den during October and November, to a depth of 1 to 3 metres under the snow, often on a steep south-facing slope of a hill where northerly winds blow the snow into large piles. A den usually consists of a tunnel leading into a large chamber. The temperature inside the den can be 4.4 degrees Celcius warmer than the outside air temperature.

The cubs, usually two, are born in November or December, after a gestation period of 7 - 8 months, and are only the size of a rat, weighing 450 - 900g. To begin with they are blind and hairless. Feeding on their mother's rich milk, they grow very quickly and when they leave the den in March or April, they are about the size of a domestic cat. The cubs leave their mother in the third spring of their life. 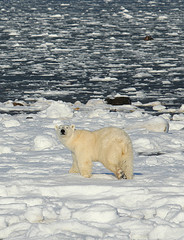