For thousands of years humans have used stone for building, whether it was for monuments, religious buildings or houses.

Why do we Quarry?

For thousands of years man has used stone for building, whether it was for monuments, religious buildings or houses. Early on, when Britain was only sparsely populated, man’s use of stone and his primitive quarrying would have had little lasting impact on the environment. Gradually, as time went on, more stone was used in building. It was a good material with which to build castles, walls, churches and important buildings since it was strong and weather resistant. As the demand for stone grew, so did the demand for quarrying.

During the Industrial Revolution demand soared. The Victorians used stone for all their major buildings and with better transport and new technology they were able to meet these increasing demands, probably with little thought as to their impact on the environment.

What do we Quarry?

Today the demand for carefully worked stone for building has been reduced by the fact that we have so many new, easier to use and cheaper building materials but this does not necessarily mean that there is less quarrying. Although stone blocks are not used so much for building as they used to be, we still use stone in a different form for building and construction work today.

There is now a great demand for stone – especially limestone – in the form of ‘crushed rock’ and it is also an essential constituent in other building and construction materials.

Creating one kilometre of road 10 metres wide could use well over 500 lorry loads of crushed stone.

Because the stone used for this sort of construction work does not have to be extracted in a high quality block form, the techniques for quarrying have changed. Now, those that quarry can be less selective. Consequently one of the best methods of quick quarrying is the use of explosives which means that great chunks of hillsides may be blown up and transported away in a relatively short time.

Sand and gravel are used along with stone in construction work. Consequently millions of tonnes are being removed from sand and gravel deposits both on land – usually close to the urban areas where they are needed – and also from the sea bed.

What effect can Quarries have?

Whilst a quarry is in use the effects on the local environment are more than just the loss of wildlife habitats and the obvious visual impact. A working quarry needs methods of transportation and this means that large amounts of machinery and heavy traffic will be brought into the area, causing an increase in local noise, pollution and erosion.

What happens to Disused Quarries?

Sometimes they are also used as leisure lakes – for water sports – although this may conflict with the needs of wetland wildlife.

Stone quarries come in different shapes and sizes. Some, like the gravel pits are relatively easy to reclaim. Many disused quarries, once they have been made safe, are used for leisure areas such as camp sites or motor vehicle racing tracks but the reclamation of others is more difficult. Removal of vast quantities of rock can change the very shape of our environment. Whole hillsides can be destroyed and layers of valuable soil removed. 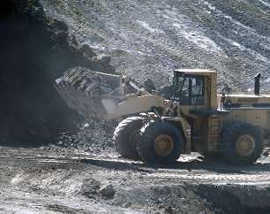 Since 1981 there has been a time-limit imposed on those who seek to extract from the land. They are not allowed to quarry for an indefinite amount of time. Companies are also required to ‘reinstate’ the land – this can involve years of careful drainage and land management in order to get the area back to a state where it can be used.

Any amount of careful management, however, will not return the land to the way it was before the rock was extracted and the species of flora and fauna that were disturbed and destroyed may never be able to re-establish themselves in that area again.