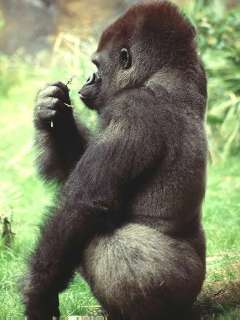 Gorillas live in the dense forest of tropical Africa where observation of their daily life becomes extremely difficult. Despite recent successful observations of the mountain gorilla in Zaire, much of their life in the wild remains a mystery.

There are two forms of gorilla. The lowland gorilla and the shaggy-coated mountain gorilla, which was only discovered in 1901.

Largest of all the living primates, an adult male will stand five and a half feet tall, with an arm spread of about 8 feet. It will weigh between 400 and 600lb, usually around 450 lb.

Despite its size and great strength, the gorilla is not an aggressive animal and will not usually attack unless its safety, or that of its family, is threatened. Vegetarian in diet, the gorilla leads an orderly family existence, spending much of the day consuming an intake of about 60lb of leaves and fruit!