The Harp seal can be found in both coastal waters or on pack ice, from the Gulf of St. Lawrence and across the Arctic to Siberia. 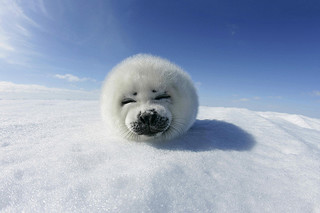 Distribution: from the Gulf of St. Lawrence and across the Arctic to Siberia.

Habitat: in coastal waters or on pack ice.

Gestation: 225 days, but twelve months in total because of delayed implantation.

Unlike sea lions and eared seals which use their fore flippers for propulsion, harp seals use their hind flippers in a side-to-side action to propel themselves through the water. They are born with white fur, but this darkens in adulthood, and they develop irregular black patches on their backs. These patches are often harp-shaped, which is how the seal gets its name.

Their lives are governed by the movements of pack ice throughout the year. All populations migrate south before the spring breeding season.

They travel in groups of ten or more, but these groups are often parts of a much larger herd, which dives, leaps and swims in unison. In May, after breeding and moulting, they head back to their northern feeding grounds.

Harp seals have good eyesight, which is very useful in the dimly lit Arctic waters. They also use their sharp ears and sensitive whiskers, which can sense vibrations in the water caused by the swimming action of their prey. Fish such as capelin, herring and cod make up most of an adult seal's diet. They are able to dive to depths of 150-200m in search of prey. Once caught, small fish are eaten whole underwater, but for larger catches, the harp seal will swim to the surface before eating.

Takes place between February and April. Pregnant cows and juveniles reach the breeding grounds in early February, and each cow picks a sheltered spot on the ice for the birth. She then defends this site from other females.

The pup is born at the end of winter, weighing 12kg, unable to swim, but with a wonderful coat of white fur. It feeds on its mother's very rich milk for just two weeks.

Suckling is brief because the mother cannot feed while she is suckling, and pups are in danger from polar bears until they are able to swim. Just before the pup is weaned, its mother will be mated by a bull seal. After it is weaned, the pup stays on the ice for about two weeks to moult its baby fur. It does not feed during this time and so loses some weight. When it does take to the water, it fends for itself immediately, catching mainly crabs.

The harp seal and humans

Threats to the harp seal.

Just 150 years ago there were 9-10 million harp seals in Arctic waters. Numbers shrank to around three million, because pups were killed in vast numbers by fishermen and hunters, who claimed that the seals were depleting fish stocks. The skins from the pups were sold to the fur trade and made into coats and other clothing.

Fishermen estimate that each seal consumes about $5.75 worth of fish every day. With a population of around 5 million seals, that's nearly $10.5 billion per year, so it's easy to see why fishermen regard seals as enemies. Indeed, Newfoundland's cod fishermen have been banned from fishing for cod since 1992, but then their overexploitation of the cod stocks didn't help the falling cod population either.

It's clear that there will be a problem with harp seals and humans coexisting in the same environment. Seals are (in the eyes of the fishermen) denying men their livelihoods, and if the seal population became too large, there would not be enough fish even to feed the seals, let alone serve the needs of fishermen. Issues are complex, and there are several sides to the argument.