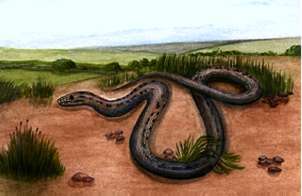 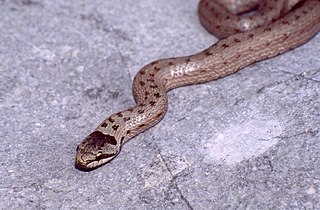 The smooth snake is slim, with a grey or dull brown body and dark bar markings.  Unlike the adder, or the grass snake, the scales are smooth, giving this snake it’s common name. It has a dark marking on the top of the head, which is often in the shape of a crown, giving rise to its generic name Coronella (which means coronet, or crown). the smooth snake also has a dark stripe running from each nostril, past the eye, and along the side of its head. Its head is an oval shape and it has round eyes and a dark red tongue.

Smooth snakes are active during the day, and spend most of their time either basking in the sun or lying in water. They are slow moving and rather secretive. They are also extremely rare in this country, so you are unlikely to see one. They live only in a few isolated areas of heathland in Hampshire, Dorset, Surrey, Wiltshire and Sussex.

Smooth snakes hibernate from around October in groups of up to 30 snakes. They emerge from hibernation in March or April to feed and possibly to mate.  Mating takes place in April and May, with females incubating the eggs inside their bodies, then giving birth to up to 15 live young that look like miniature adults in September or October. Females do not breed every year. The smooth snake has a relatively long life span of up to 20 years, so the need to breed regularly is less and they will often not breed in years where food is more scarce.

The main reason for the scarceness of smooth snakes is the destruction of their habitat - a problem they share with the sand lizard, with which they share much of their remaining territory. Areas of heathland are being destroyed to make way for the building of houses, and where this is happening, smooth snakes are dying out.  However, they also have plenty of predators, including birds of prey, foxes, badgers, weasels, pheasants and crows. Additional dangers come from areas where housing is near heathland, as the snakes are vulnerable to attacks by domestic cats and people. As a defensive mechanism, they can secrete a foul-smelling substance from their anal glands.  This is designed to put off predators!

Smooth snakes are now fully protected in this country under the Wildlife and Countryside Act 1981, and their habitat is protected under European law.  They cannot be killed, injured, traded, disturbed or have their habitats damaged or destroyed by humans.