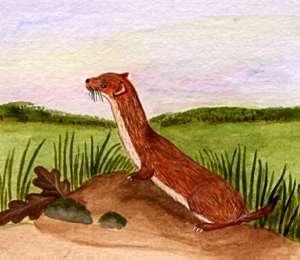 Weasels are often known as sneaky and deceitful creatures.  We even associate the name “weasel,” with negative behaviours and weasels often represent dishonest characters in books. Humans have persecuted weasels over the years particularly in areas where pheasants and partridges are reared; gamekeepers and farmers have always regarded weasels as vermin and trapped them in large numbers. In fact, since one weasel may eat hundreds of mice in a year, it should be looked on as a useful friend, doing more good than harm!

Cats, owls, foxes and birds of prey will all try to kill weasels, although a weasel will fight hard to defend itself. Many weasels are killed on the roads too, but despite the dangers they face from humans, they are still quite common and are under no threat as a species.