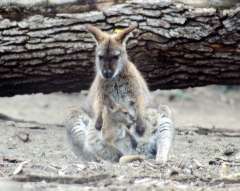 Freshwater Crocodiles can be found throughout the coastal and inland regions of northern Australia, from Western Australia to Queensland.

They are usually found upstream in rivers but can tolerate some saltwater. Their main habitats include wetlands, rivers, creeks and swamps, and they do not mind still water, fast flowing, muddy, shallow or deep water.

At the end of the wet season freshwater crocodiles usually move to more permanent water.

Mating occurs in the dry season during July, and nesting occurs over a two or three week period during August.

Freshwater crocodiles dig hole nests in sandy river banks. As the eggs are close to the ground water table, they are more susceptible to flooding at the start of the wet season.

Females tend to return to the same nesting sites year after year.

The female crocodile is not a good defender of her eggs. Almost 80% of nests are destroyed by predators such as monitor lizards and pigs.

The average size of the clutch is around 13 eggs. The largest clutches are laid at the start of the nesting period. The incubation period is around 74 to 80 days depending upon the outside temperature.

Hatchlings weigh about 42 grams and measure about 24 cm at birth. They have one small tooth which that they use to split the egg to get out, and are often helped by their mothers. The mother will then carry the hatchlings to the water in her mouth. The mother stays with her little nursery of hatchlings for a few weeks.

The hatchlings’ rate of survival is less than 1% as birds, other crocodiles, turtles and large fish prey on both eggs and hatchlings.

Crocodiles vary in size and are largely influenced by environment, habitat, genetics and diet. Males can reach from 2.4 to 3 metres and can weigh up to 53kg. Females are usually smaller getting to about 2 metres in length. It takes juvenile crocodiles about 20 years to reach their maximum size. Males reach sexual maturity at around 16-17 years and females at 11 – 14 years.

Freshwater crocodiles live for about 50 years.

The biggest threat to freshwater crocodiles is loss of habitat to farming or development.

Freshwater crocodiles only become dangerous when they are teased or irritated. 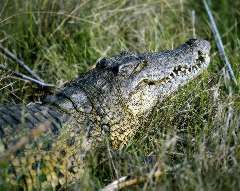 The spiny anteater is a monotreme.  Monotremes are a type of egg-laying mammal.

The spiny anteater can only be found in Australia, Tasmania and parts of New Guinea.

Spiny anteaters are most active at night, except when the weather is cold.

The spiny anteater has a good sense of smell and is also known as the short nosed echidna (which is the more common variety).

It can easily demolish a termite mound in an attempt to reach its favourite food. It mostly eats termite ants and other small invertebrates, which it grinds up in its mouth with specially adapted spines instead of teeth.

The spiny anteater is round and covered in closely set spines – a bit like a giant hedgehog.

When threatened, the spiny anteater will roll itself into a ball, exposing its sharp spines.

The female give birth to a single, sticky egg in a specially formed ‘pouch’, called the incubatorium, where it hatches seven to ten days later. The pouch is not permanent and only develops once the egg has been fertilised. The egg is leathery unlike a bird’s egg.

When the baby is born it is blind and hairless and only 1.25 cm long. The baby stays in the pouch until its spine is fully formed – about 3 weeks later and then it leaves the pouch.

Spiny anteaters can live for over 50 years.

Kookaburras can only be found in Australia.

There are two types: the laughing kookaburra and the blue-winged kookaburra.

Kookaburras can live for 20 years or more in the same family groups. They pair for life and build their nest in a hole of their favourite tree.

An adult female kookaburra becomes sexually mature at one year, and will lay between one and six blue-green blotched eggs in a season with an average of four eggs to a nest. The eggs are kept warm for 25 days before they hatch.

The babies are fed by both the mother and father, and stay with their parents for four years.

Kookaburras have good eyesight and are fierce hunters. Their favourite foods are lizards and snakes but it also eats insects, earthworms, fish, frogs and toads, mice, rats and other rodents. They kill their prey by beating it against a rock, then pound it with their beak to soften the meat making is easier to eat.

The kookaburra eats its prey whole sometimes having to rest for lengths of time waiting for the first half of the animal to be digested so the second half can be swallowed. The Kookaburra can then regurgitate food and store it in the nest for future meals. The laughing kookaburra, also known as the laughing jackass, is the largest member of the kingfisher family. It got its name from its distinctive laugh, and can be heard at sunrise and at sunset.

They have about six different calls, each signalling something different to the family or intruders.

It is mostly coloured brown with some black barring on its wing and tail feathers. The fluffy head and chest are a whitey-grey colour. A small amount of bright blue can be seen on its wings.

The blue-winged kookaburra is smaller than its cousin the laughing kookaburra.

It lives in the mangrove swamps of Northern Australia and has a preference for aquatic food such as fish, freshwater crayfish, frogs, waterworms and small crabs.

The head and chest are fluffy and covered with light coloured feathers, the rump and wings are coloured bright blue and it has some brown feathers above its dark blue tail.