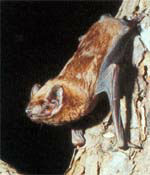 There are eighteen species of bat in Britain and all are protected under the Wildlife and Countryside Act.  One of these species, the Greater mouse-eared bat was officially declared extinct in Britain in 1990, but there were reports of sightings across 29 locations in the UK in the winter of 2011/2012.

All British bats hibernate. They build up fat during the autumn and find a cool, humid, sheltered place such as a crevice in a cave. All their body systems slow down in order to save energy and their heart rate drops to around 20 beats per minute when hibernating - compared with 1,000 beats per minute in flight. During mild spells in winter, bats may wake up and fly to feed or move to a different site.

Bats were once very common in the British Isles, but now, for a number of reasons, they are in decline.

The worrying reduction in bat numbers has been attributed partly to loss of roosting sites, such as hollow trees. Although most species of British bat have adapted to roosting in buildings for at least part of the year, trees are still used at other times. Some bats, such as the noctule and rare Bechstein's bat depend almost entirely on trees. Another reason for their decline is increased use of insecticides, thus depriving the bats of their insect food. Also chemical timber treatments in buildings can poison bats, for more information on timber treatments and bats see Natural England.

Bats often choose houses for their summer roosts, perhaps choosing lofts or crevices behind roof tiles. Some people dislike the idea of bats living in their house, but they do no harm. Bats are protected by law and it is illegal to disturb a roost unless you are a licensed bat worker.

It is very exciting to have bats living at close quarters, giving you the opportunity to watch them flitting round your garden on summer evenings, catchng flying insects. Pipistrelle bats seem to prefer modern houses, whilst older houses with larger lofts attract long-eared bats.

If you are not lucky enough to have a roost, you can attract bats into your garden by growing stongly-scented flowering plants , such as honeysuckle, sweet briar and white jasmine. These will attract insects, which in turn attract bats.

If you do not have a garden, the best places for bat-watching are ponds and lakes. An easy way to watch bats at night is to watch street lights. Bright street lights attract insects and the bats, particularly pipistrelles, get to know about this food supply.