Although the blue tit is mainly a woodland bird it is one of our best-known garden birds. 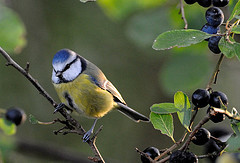 Distribution: widespread throughout the British Isles and Europe from southern Scandinavia, east to Moscow and south to North Africa.

Description: small, bluish above and yellow underparts. Bright blue crown and white cheeks. Juveniles are much yellower than adults.

Although the blue tit is mainly a woodland bird it is one of our best-known garden birds. It readily feeds on nuts and scraps put out for it and its cheeky, acrobatic behaviour is a delight to watch.

Blue tits are noisy, sociable and inquisitive birds. They use their strong legs and claws to hang at any angle and investigate clusters of buds or pick off a caterpillar from a leaf. During the summer the blue tits live mainly on insects found in the tops of trees. In autumn, food from the hedgerow is important, including hawthorn and elderberries. The blue tits' strong stubby beaks can break into tough tree seeds such as beech-mast. The main winter food is seeds; blue tits are often seen feeding in gardens where they readily accept nuts, fat etc. They follow a routine feeding patrol and in a single day, over 200 may feed at a nut bag.

Blue tits breed wherever there are areas of trees with suitable nest holes. They start looking for nesting sites about February, preferring small holes or narrow cracks in trees about 1 - 15 metres from the ground. Nest-boxes in gardens are readily used, especially if there is a shortage of natural sites in an area. Both males and females search for nest holes, but when the male finds somewhere suitable, he displays by fluttering his wings and calling to his mate; he will then go into the hole, calling the female and hoping she will follow and approve the site. She doesn't always approve it and may reject several before deciding on the one she wants! She builds the nest alone, collecting moss, dried grass, dead leaves and wool to fill the bottom of the nest hole; she forms a cup-shaped structure with this material and finally lines it with soft feathers or hair.

A clutch of 7 - 13 eggs is laid from mid-April to early May. The eggs are white with reddish-brown speckling and are laid at the rate of one a day. Incubation begins only when the clutch is almost complete - the female usually covers the eggs with some nest lining if she has to leave them for a while.

Incubation lasts almost two weeks and whilst the female is sitting on the eggs, the male defends the area around the nest site from other blue tits, so protecting the available food needed for both adults and, later, the young. He also brings food to his mate. The young hatch at a time when food is at its most abundant. They are fed by both parents, mainly on small caterpillars, and stay in the nest for two or three weeks. The adults also remove the droppings regularly, to keep the nest clean.

The total breeding population of blue tits has probably declined in the last 40 years because of the loss of many woodlands. However, they are still quite common and there are over 4 million breeding pairs in the British Isles.

Blue tits in the garden are helpful as they feed their young with thousands of caterpillars during the spring and summer, so helping to keep down the numbers of plant-eating pests.

We can help blue tits by feeding them with peanuts and fat, especially during the winter. Whole peanuts should only be offered in a mesh container, enabling birds to peck off little bits of nut. If a misguided parent bird were to feed a whole nut to its baby, it may cause it to choke and die. Nesting boxes with small entrance holes may be put up in suitable places in the garden to provide extra nest sites.